The Most Disloyal CEO

We've seen in the past how I receive petitions from other players about my Agents' activities. To be sure, accountability begins with the leadership. That's why, when a miner becomes unruly, a report may be filed with their own CEO.

Agent Alana Charen-Teng had a less-than-satisfactory encounter with Eddie Neutron, a highsec miner. She reported this to Straider, the CEO of Eddie's corp.

For some reason, Eddie had been in a very bad mood on that particular occasion. He skipped the customary Hitler comparisons and told Alana she reminded him of Jane Goodall. An unusual comparison, but maybe there was something to it...

After all, Eddie was going ape in local. Totally bananas, in fact.

Agent AeleDeux filed an additional report with Eddie's CEO. AeleDeux was the Agent on the spot. He had ganked Eddie's fail-fit Covetor and AFK pod.

AeleDeux provided additional context about the interaction. Before Alana reported to the scene, Eddie was already making a monkey out of himself. AeleDeux commanded the miner to calm down--but he didn't! 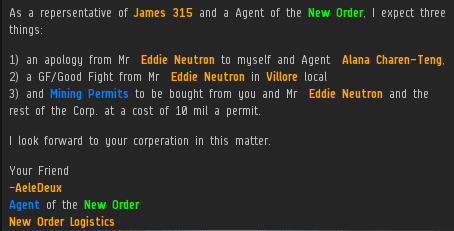 CEOs always want to skip to the bottom line. AeleDeux presented Eddie's CEO with a three-point plan to fix the problem.

The CEO wasn't online at the time, but Eddie was. When he received copies of the EVEmails being sent to his CEO, he wasn't happy. He behaved like a typical carebear. How would the CEO react? What kind of corporation was this?

Eddie belonged to Black Sun Brethren. According to the corporation's website, they only operate in highsec, and they only do boring stuff. Like other boring PvE-only highsec corps, they deliberately target new EVE players for recruitment. That's right, some players' first experience with this game is hanging out with Eddie Neutron.

On the other hand, Black Sun Brethren is also interested in recruiting old players. They assist in "all areas and ways". Good thing they have a focus.

But back to the business at hand. After several hours, the CEO, Straider, logged in and reviewed all of the Eddie info. Then he made his decision.

Straider was defiant. He stood by Eddie and threatened to declare "ware" on anyone who would gank his corp members. He supported his corp member instead of embracing the Code. It was an act of supreme disloyalty. In highsec, the New Order comes first. Family > corp. 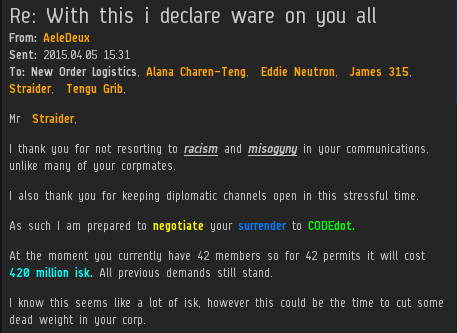 AeleDeux acknowledged the EVEmail and offered the Black Sun Brethren corp a special deal on mining permits: Only 10 million isk per member! 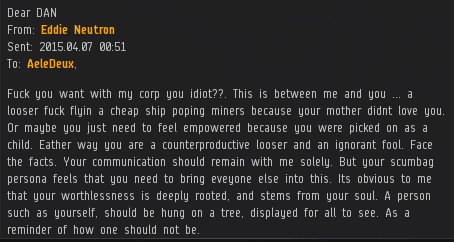 When Eddie found out about AeleDeux's special offer, he was furious. Still a bit miffed about his lost Covetor and implants, he expressed his desire to see AeleDeux hanged on an in-game tree.

Normally, highsec CEOs are quick to throw their mouthiest members under the bus when an Agent demands it. Straider's disloyalty is unusual. Nevertheless, this matter is still ongoing.
Posted by MinerBumping at 18:57