So Life Can Be Good Again, Part 1

The world we live in can be a messed-up place sometimes. Some look at the state of the world and, feeling powerless, throw up their hands. But others--the best of us--are filled with determination. We will do whatever it takes to save the world. 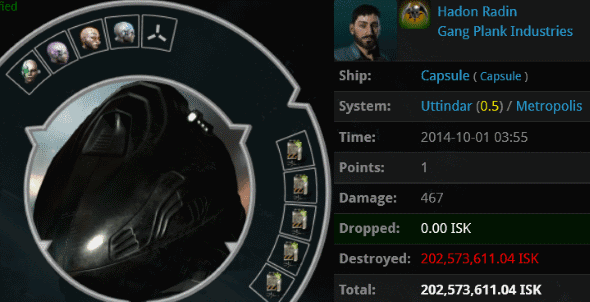 Among the steps that need to be taken: Killing all of the auto-piloting pods in highsec. Hadon Radin was caught in the act of violating the Code. Agent Tisiphone Dira put a stop to this disaster before things could get any worse.

The crisis was averted. However, Tisiphone needed to make sure the perpetrator understood the severity of the situation.

A confession was quickly obtained. The police make it look a lot more difficult than it is.

Hadon claimed total ignorance of the Code. It's not like it's a revolutionary wave that's been sweeping highsec and dominating EVE conversation for the past few years.

The bot-aspirant was entirely oblivious to the situation. Now, for the first time, he realized that he hadn't successfully made the trip to Jita. He was too busy "fixing his washer" to notice what had been happening in-game.

Tisiphone got the carebear up to speed. Hadon was stunned when he learned that the kind young Agent he'd been speaking to this whole time was actually his killer.

Hadon flew into a rage. (Carebears are so much more polite when they don't know they've been killed.) In his anger, the carebear expressed his wish that Tisiphone die, so life could be good again. Naturally, our Agent hastened to clarify that an in-game death, rather than a EULA-violating real-life death, was what Hadon intended.

Sadly, carebears rarely take the lifeline. Hadon confirmed that he wished real-life death upon all who would shoot an autopiloting pod.

Tisiphone gave Hadon a short break so the carebear could compose himself. In the meantime, Tisiphone hoped, Hadon would familiarize himself with the Code. But then Hadon admitted that he had read the Code after all. Of course he had. The Code is unbelievably famous.

Despite the New Order's track record of good works, it actually has a poor reputation in some circles. Hadon harbored prejudices against those who enforce the Code. Once again, he confirmed that his attitude extended beyond the context of the game.

As the carebear condemned cowardice and cruelty, he announced his desire to murder an entire continent of people. Surely this was not the stuff of which Code-compliance is made. Would Tisiphone be able to convince Hadon to buy a permit?