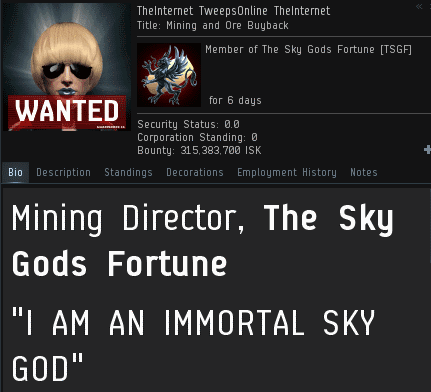 The Sky Gods Fortune had a new director. After nearly 80 minutes of loyal service, TheInternet TweepsOnline TheInternet completed his climb up the corporate ladder. He was now only a heartbeat away from the corp's highest office. The corp's founder and CEO, Scoot Sollete, was deeply impressed by TheInternet.

If TheInternet harbored dreams of becoming CEO, he kept them to himself.

Instead of working, TheInternet called it an early night. But he planned to hit the ground running the next day. He had big plans for the corp.

However, the next morning...

TheInternet awoke to find a completely different picture. He was no longer a director. All of his roles had been stripped from him. Scoot even took the 100 million isk that TheInternet had deposited in the corp wallet.

Something had changed, indeed. Scoot was incredibly suspicious of TheInternet. Now he insisted on a full API background check of TheInternet. No longer would he accept the bits and pieces of information that had satisfied him the previous day.

Scoot explained that in the time since TheInternet had logged off, he'd uncovered a spy within the corp. Scoot was willing to return TheInternet's 100 million isk, but he would not give him any authority in the corp until he submitted to a full background check.

A corp infiltrator had made himself known to Scoot and began making demands. It shattered Scoot's sense of security. However, TheInternet made a good point in his own defense: Why would a corp thief deposit 100 million isk with a corp he planned on stealing from?

As if there hadn't been enough drama for the day, another important piece of information came to light. Shut It Down declared war against the corp.

The industrial corp's CEO couldn't handle all of the chaos. Luckily, TheInternet kept a cool head. Though no longer a director, he stepped up to the plate.

TheInternet's expertise was indispensable. He understood life in modern highsec. Every industrial corp is constantly under threat from Code enforcers, who attack from every angle.

Scoot took a few moments to catch his breath and comfort a fellow corp member. The corp member was shaken, but was mining to calm his nerves.

Seeing how important TheInternet's leadership was to the corp, Scoot offered to skip the background check and make TheInternet a mining director again--but not a full director. That wasn't enough for TheInternet, though. He felt he had proven himself trustworthy.

Scoot relented. TheInternet was restored to full director status, and not a moment too soon. War was on the horizon. And it would be up to TheInternet to lead the corp to victory, or death.