So Life Can Be Good Again, Part 2

Previously, on MinerBumping... Australia under threat! Hadon Radin was so perturbed about losing his AFK autopiloting pod that he condemned everyone involved in the New Order. When Agent Tisiphone Dira disclosed her country of residence, Hadon condemned its people, too.

Hadon quickly changed the subject, returning to his earlier rant about New Order cowardice. Nuclear genocide to avenge a spaceship loss is fine, but it's bad form to shoot an AFK pod.

The carebear announced his intention to become an enemy of the New Order. He had no respect for the Code. He wouldn't even do us the courtesy of sparing a few capital letters. No matter. We have plenty of capital letters to spare: Some carebears use nothing but capital letters when speaking to us.

Hadon backpedaled on the murder issue. Now he was against it, at least where in-game murder was concerned.

A common symptom of carebearism is rewriting the rules of the game to suit their own needs. They can't win at EVE, so they imagine a version where they can. In this case, Hadon believed himself to be on EVE's journey server, rather than the PvP server where he actually was.

The complaints continued. Now it was supposedly Tisiphone's responsibility to tell carebears in advance when a fight was coming, and how to prepare for it. Hadon Radin must consider himself to be one of those benighted "new players" who get abused in highsec. (He's been playing for more than four years.) 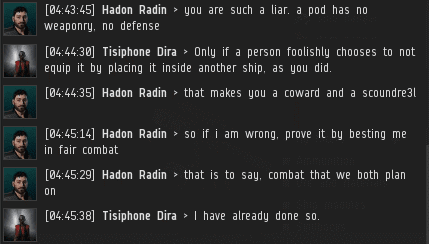 Hadon wanted a rematch. Tisiphone saw no need for this. By undocking, Hadon had consented to PvP. Besides, logging into EVE implies a willingness to fight. Hadon and Tisiphone had therefore already participated in a fair fight, and Tisiphone won. Another victory for the New Order!

Still, Tisiphone prefers the fun of killing a ship before destroying the pod within. She gently chastised the carebear for his bad manners. 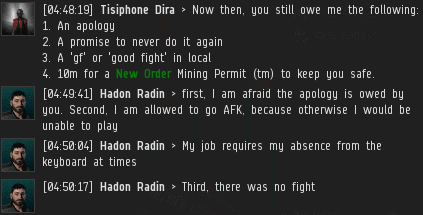 Highsec has a set of rules: The Code. But Hadon had his own rules. For instance, he needed to go AFK, because of his job. This was a new excuse; earlier he claimed he went AFK to fix his washing machine. Still, can you imagine Hadon's special AFK needs being accommodated in any other game, or in nullsec? Modern highsec is no different.

Then, for the first time, Hadon revealed his true nature: He owned powerful alts! He wasn't a carebear at all. Now Tisiphone Dira was a hunted Agent.

It turned out that Hadon Radin was the only carebear character among his "many alts". The rest are PvP'ers who are allowed to go AFK in battle because Hadon's job requires it. 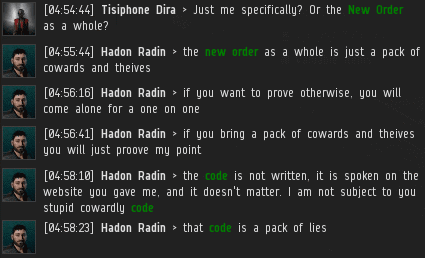 The powerful PvP'er opened up a fresh rant, calling the New Order a pack of cowards and thieves that follow a Code--which is itself a pack of lies. Packs within packs. 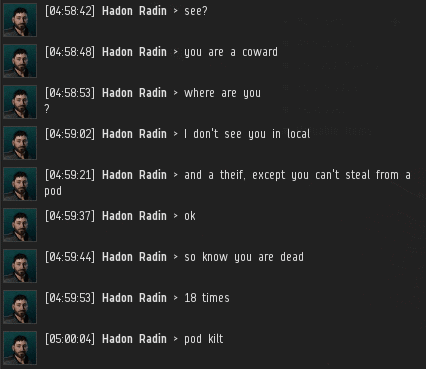 Tisiphone wasn't able to sell the carebear a permit that day. However, Hadon did promise to engage in PvP at least 18 times. It's a start!
Posted by MinerBumping at 18:00