It's hard to find another business venture in EVE that has been supported by so many individual investors. Incredibly, more than 1,000 players and corporations own stock in the New Order. 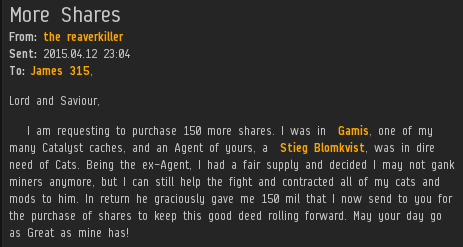 Most share purchases take place in smaller amounts, bundles of 10 or 50 or 150. The people who buy shares like this are used to good ol' fashioned hard work. They're salt-of-the earth folks. We celebrate their efforts. They're the backbone of highsec, and we want to make empire space better for them and their families.

Nevertheless, the highsec community has a fascination with the high-rollers, the shareholders who throw around the big bucks. These are the people who maneuver for the top shareholder spots and hold secret conversations in smoke-filled cloakrooms (that's a room where people go while they're AFK cloaking). 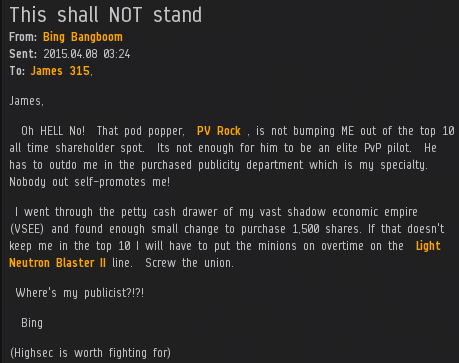 In our previous shareholder update, Bing Bangboom got knocked out of the top 10. He took notice, purchasing an additional 1,500 shares. This sent us over the 583 billion isk mark and earned him a Supreme Protector's Tip of the Hat™--while securing his position in the top 10. PV Rock was bumped out of the top 10. Bing loves to bump!

Meanwhile, Mark Eting purchased an additional 315 shares. This sent us over the 584 billion isk mark and earned him a Supreme Protector's Tip of the Hat™. Not too shabby. 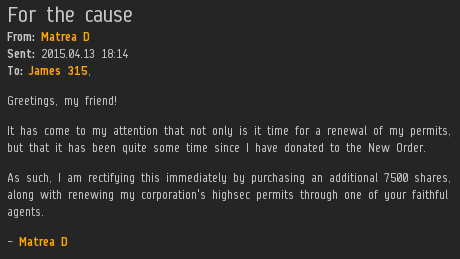 This is where things get really interesting. Unbeknownst to Bing, Matrea D purchased an astonishing 7,500 additional shares. Matrea, a savvy industrialist, recognized early on that the future of highsec industry is Code-compliance, so she updated her corp permits, as well. Her share purchase sent us over the 585, 586, 587, 588, 589, 590, and 591 billion isk marks and earned her a coveted Septuple Supreme Protector's Tip of the Hat™.

With a total of 16,000 shares to her name, Matrea is now the fifth biggest shareholder in the New Order. Top five, baby! At the same time, she knocked a bunch of other shareholders down a rank. But you can't keep a good Bing down. Though he couldn't have anticipated Matrea's big move, his purchase was enough to vault him over two shareholders, not just PV Rock. Thus, Bing maintains an uneasy grip on position #10.

Exciting stuff!
Posted by MinerBumping at 19:05