The New Order is an unstoppable war machine. No one disputes it; our killboard stats are undeniable. We destroy countless bot-aspirants on a daily basis. But in EVE as in life, it's much more difficult to build things than to break them.

Agent Kalorned knows this better than most. In order to create a sustainable, Code-compliant community in Gamis, he's had to establish ties with the local community. By creating relationships and building trust, Kalorned has greatly increased his ability to gather actionable intelligence and respond quickly to threats.

Even so, protecting Gamis and other nearby highsec systems requires a proactive approach. Once you understand the geography of the Gamis area, you'll see why: 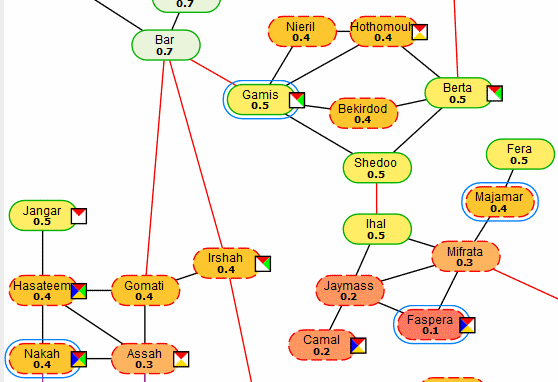 Gamis is located on the border of Derelik's lowsec systems. The borderland is also the gateway to a few highsec "islands". If our Agents stopped at the edge of lowsec, the New Order's enemies could use the area as a safe haven. Furthermore, lowsec residents could skip in and out of highsec without regard for the Code. 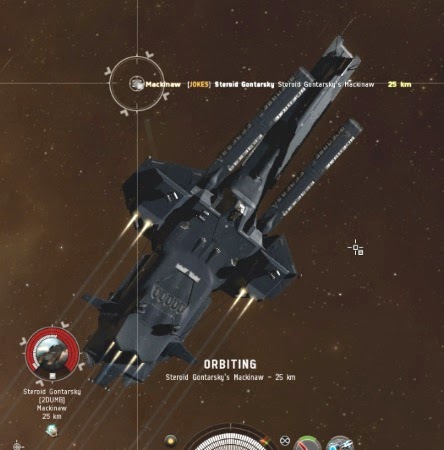 Our Agents have the authority to take any and all measures needed to safeguard highsec. Despite the carebears' taunts of "you bully people in highsec because you'd never make it in lowsec", our Agents pursue offenders no matter where they flee. During one such pursuit, Kalorned happened to discover a Mackinaw bouncing around between lowsec asteroid belts. 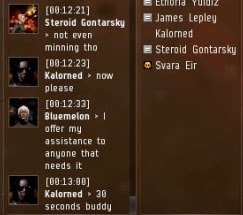 As anyone who lives near Gamis should know, Kalorned declared a "DMZ" in the borderland. It's simply the only way to keep the area from becoming a nest of bot-aspirant sympathizers. Steroid Gontarsky's Mackinaw was found in violation of this order.

Luckily, Kalorned was willing to let the miner off with a warning, if he paid for a mining permit plus a fee to cover the costs/risks associated with Kalorned's lowsec patrol. The miner stalled. A new ship appeared on Kalorned's D-scan. 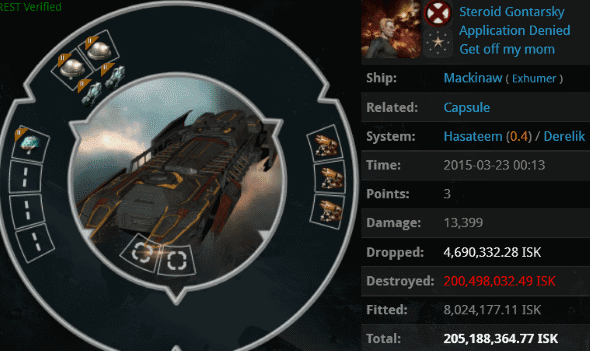 With time running out, Kalorned had to make the call to destroy Steroid's Mackinaw. The miner was simply too slow in paying. 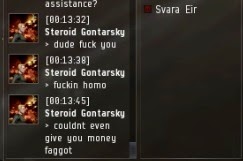 Steroid was disappointed in himself for not being able to arrange a transfer of isk quickly enough. Judging by his remarks in local, he also allocated some of the blame to our Agent. 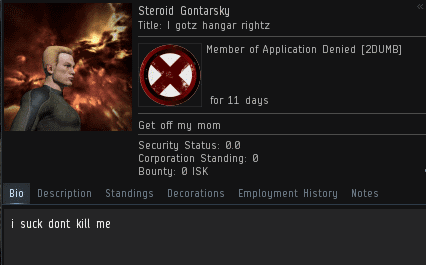 Steroid Gontarsky was a pitiable miner. Yet the mercy of highsec occasionally alights upon those in the borderlands. Agent Svara Eir, one of Kalorned's intelligence assets, assisted in the kill. She was determined to help the miner learn how to play the game. 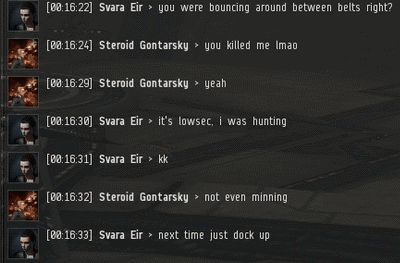 To begin with, Svara advised him to dock up, rather than trying to escape by bouncing between asteroid belts.

EVE's mechanics make it very easy to avoid combat, assuming your enemy hasn't caught up to you yet. Svara enlightened the miner. Armed with the new knowledge, Steroid could easily protect his vessel the way a responsible EVE player should. Now it was time for Svara to bask in the miner's gratitude.