If you've got questions, we've got answers. However, miners appreciate a lesson even more when they learn it for themselves...

No matter how you found MinerBumping, you came to the right place. Time for another edition of the Grab Bag!

An Agent who demands payment for a permit is not out of his mind; he's within the Code. Exactly where everyone ought to aspire to be.

Some miners are slower than others. Kirche Todes was ganked and podded, but insisted she'd "carry on in her gaming as if the incident never happened." It's hard to learn new things that way, isn't it?

An Agent of the New Order always causes a sensation in local. It's hard to imagine how silent highsec used to be, before we came on the scene.

Miners have all sorts of funny ideas about the way the game is supposed to be--and none of them are found in the Code. Tommy SpaceWarden felt it was inappropriate to gank a player after he disconnects. But I bet he'd be all over an asteroid that disconnected.

Solrac Tolan was pushing some new ideas of his own: He feels 0.5 security space shouldn't be considered part of highsec. Sorry, I'm not willing to give those systems up.

"Yes" to both questions. 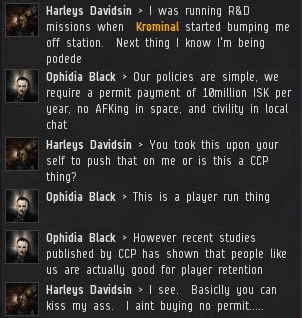 Just as I've always suspected: The carebears don't really care about player retention at all!

Super Amario was one of those carebears who had a catchphrase he was trying to establish. Unfortunately, it raised more questions than answers. Our Agent instructed the miner to calm down...

...But the miner kept trying to make "don't forget the wet wipes" happen.

Agent Black Pedro had no idea what he was in for when he received an EVEmail with the subject line, "afdaf". Upon reading the message, it seems the subject was a bit misleading.

Last year, MinerBumping reported on Lisanna struss, who was All Strussed Out after losing her Drake. 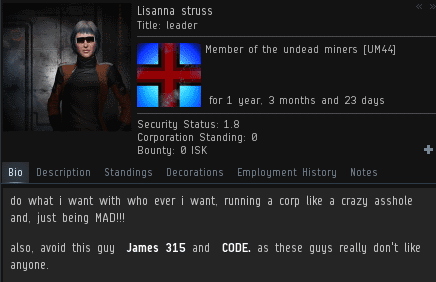 She's still upset these days. I remain convinced that we can resolve our differences. We don't dislike the miners; we merely wish that they would apply themselves.

sam5 let loose a string of "fack" bombs. That's the difference between the New Order and its opponents: We have facts on our side, and all they have are facks.
Posted by MinerBumping at 18:57