A couple months ago, CCP implemented a nerf to awoxing. The idea was that new players were missing out the chance to join outstanding highsec industrial corps because of the fear of awoxers. According to the advocates of the awox nerf, once awoxing was gone, highsec corps would be flooded by eager newbies who left their NPC corps. The exciting business of highsec industry would then lead to a boom in player retention, and CCP's revenues would skyrocket.

Though the anticipated spike in subscription numbers didn't materialize, highsec industrialists are still hard at work recruiting members and building their dream corps. Take, for instance, Scoot Sollete, the CEO of The Sky Gods Fortune. They're a highsec industrial corp, and they're always on the lookout for new talent.

Scoot was contacted out of the blue by a potential recruit. But did TheInternet have what it takes to be a member of a highsec PvE corp? He would need to pass the interview.

TheInternet was a promising applicant. A skilled freighter pilot, TheInternet shared his ambitious dream of creating an ore buyback program. As luck would have it, Scoot was already thinking of doing the same thing! It looked like a perfect match.

...There was just the simple matter of a security background check to deal with. Scoot was no fool. He was perfectly aware of the danger posed by saboteurs--even in the post-awox era.

TheInternet wasn't willing to submit to a complete background check, but he did provide a limited API key so Scoot could check his wallet. So far, so good. Scoot was also able to check TheInternet's employment history.

Over the past several months, TheInternet had been a member of 10 different corporations. Now it was time to add one more to the list.

Only a few minutes after joining the corp, TheInternet was well on his way up the corporate ladder. The Sky Gods Fortune's new mining director was primarily focused on his ore buyback program. For those who are unfamiliar with ore buybacks, they're a very popular corp activity for highsec industrialists. Basically, they work like this: The corp's miners spend all day mining. Instead of taking the ore a few jumps to Jita and selling it for the full price, the miners sell it to their corp leaders for less money. Then the corp leaders can take it to Jita and sell it at the higher price. The miners do something boring and make less money; the corp leaders make a profit. Everybody wins!

The corp's plans for an ore buyback program hit a snag when the CEO realized he didn't fully understand the corp interface. TheInternet suggested that he be promoted to full director status.

Director status would give TheInternet full control of the corporation. But Scoot wasn't sure he was ready for that yet--TheInternet had only been a member of the corp for 20 minutes.

Scoot's suspicions were raised. Now that TheInternet was a corp member and promoted to mining director, it was time for Scoot to find out if he had a history of awoxing. He did. 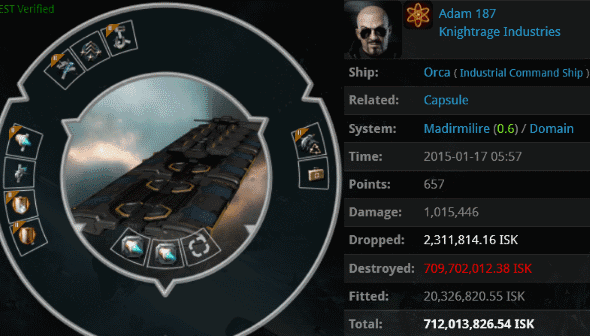 The Orca in question belonged to a fellow named Adam 187. Scoot didn't know it yet, but you might recall that the destruction of Adam's corp was described in detail in a series of MinerBumping posts:

The posts recount TheInternet's awox operation against Adam's corp. The incredible truth is that the TheInternet wasn't an innocent freighter pilot at all--he was actually an awoxer who specialized in enforcing the Code. He was secretly an Agent of the New Order the whole time!

TheInternet's Orca-killing history jeopardized his promotion to full director status. In fact, his very career at The Sky Gods Fortune was threatened. Would TheInternet even be able to implement his ore buyback program?