A new day has dawned in highsec. The effect of the Code has been so great, carebears from the old days hardly recognize the place anymore.

The bot-aspirant carebears are relics of the past. If they could, they would make highsec go back to the way it used to be. 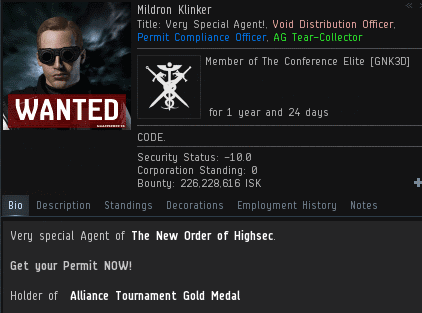 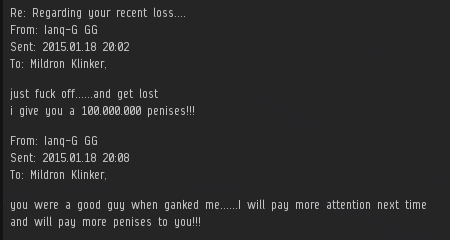 CCP may sell monocles, but they don't sell Agent badges. It would be cool, yet unnecessary, since anyone can recognize an Agent: They're the ones who don't spend their time shouting about penises and such. They're too busy winning.

Agents stand in sharp contrast to the lesser players of EVE--if they can be called "players" at all.

Despite the incoherent ramblings of the carebears, we know they're paying attention. For instance, some will reference things in the Code, or in an Agent's bio.

They look at Mildron Klinker's bio and immediately feel guilty in the presence of an Agent of the New Order. They know they have been judged under the Code.

Most carebears don't immediately respond with an acknowledgement of their guilt or a payment of 10 million isk. They want to see if calling an Agent "horse foot" will suffice. It won't.

Bitterly clinging to their isk, the carebear claims total freedom to mine in highsec. The destruction of their mining barges and exhumers suggests otherwise.

The Code is clarity; the words of the carebear offer only confusion.

Finding themselves powerless in-game, the most hardened bot-aspirant wishes real-life death on the Agents. Failing that, they beg CCP to deploy permabans. A man may die, and a hero may be permabanned. But you can't kill an idea. 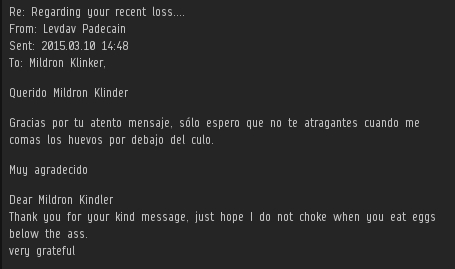 Despite their trickery, our enemies failed to slow the rising tide of Code-compliance. The most candid of them admit that there's only one way this story can end.

...Total victory for the New Order. Even those who will "never" pay, do pay.

The bot-aspirant's habitat is being transformed. They call it the death of EVE. They accuse us of driving away the game's subscribers. 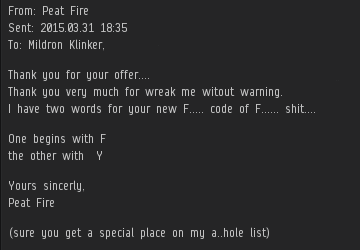 The numbers don't lie. The New Order is a cleansing fire in highsec. We improve retention rates among the majority--those who are interested in playing the game. We clear their path by removing those who would only bot or aspire to bot.

The carebears are a curious people. They have even more difficulty understanding us. In time, however, when they see highsec turn into its final form, they will learn to appreciate the Code's beauty.
Posted by MinerBumping at 19:41