Alliance Executor to the Rescue, Part 2

Previously, on MinerBumping... A high-level diplomatic crisis! Agent Mildron Klinker performed a series of three masterful ganks against Alwar Alliance miners over the course of three days. The alliance executor, Javen Kai, had no choice but to intervene personally. 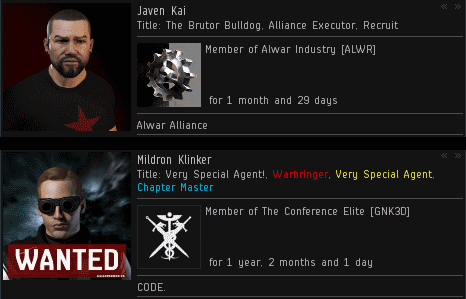 Now the fate of the Uphene system came down to a battle of wits between the "Brutor Bulldog" and a Very Special Agent of the New Order.

Alwar Alliance's executor was still in denial. Despite being forced to contact the ganker for a negotiation, he didn't want to admit that Mildron held power over his miners. Javen didn't think they should have to dock up when a ganker came into the system. What an inconvenience that would be! But no matter how carebears feel about gankers, they can still be killed by them. The New Order forces them to confront this reality.

Javen's plan to neutralize Mildron was thwarted when the Agent declined his request to stop ganking. Now the Brutor Bulldog would need to get tough.

Javen Kai had a very particular set of skills, skills he'd acquired over his four-year career in EVE. Skills that made him a nightmare for gankers like Mildron. Thus far, however, he'd only used his skills to grind isk and create a highsec mining corp.

Javen was certain that his threats would work. What he failed to realize is that Mildron is an Agent of the New Order. Our Agents do not fear PvP; they seek it out. Discouraged, Javen tried to convince Mildron that the Code had no merit.

The industrial alliance executor insisted that he was completely unfamiliar with me and what I do. He probably wasn't being entirely honest.


Javen Kai > you guys are like annoying rats
Mildron Klinker > just to make Highsec a better place
Javen Kai > i dont think anyone in CODE. or James 315 have the intelligence capable of knowing what is actually best for highsec
Javen Kai > only thing you guys do is make the price on catalysts pretty high
Mildron Klinker > actually we do, removing bots and bot aspirants is what we do, best thing ever happened to Highsec

The Bulldog's bullying got him nowhere with the fearless Agent. Left with no alternative, Javen tried to persuade Mildron that his actions weren't saving highsec.

As time went on, Javen grew increasingly frustrated. Mildron wouldn't budge. The New Order accepts nothing less than total compliance with the Code.


Mildron Klinker > no, but a bot aspirant he definatly is, else he would have docked up already when i entered the system
Javen Kai > nah you scouted him with your alt
Javen Kai > then logged on Mildron after you got the warp in
Javen Kai > leaving little time for him to react after seeing you pop up on watchlist
Mildron Klinker > well, teach your guys to be aligned to a station then, so they can initiate warp once i enter the system

The core of the problem was that Javen, like all carebear-minded individuals, was simply unwilling to accept that highsec miners need to adapt to the presence of other players. They wouldn't do anything to minimize their risk of being ganked. They felt entitled to 100% safety.


Javen Kai > so if your going to enforce your "CODE"
Javen Kai > at least do it fairly huh?
Javen Kai > but you guys arent about the code
Javen Kai > just about killing people that dont fight back
Javen Kai > if you truely wanted to follow a code you would open up a convo
Javen Kai > and ask them a simple question
Javen Kai > like.. are you a bot

It was bot-aspirancy at its finest. Javen wanted the Code to be rewritten so it didn't impose any rules making miners put in effort to stay safe. This is the same mentality that leads a carebear to spend billions on blingy modules but balk at paying 10 million isk for a permit.

Try as he might, Javen just couldn't win the argument. He'd underestimated Mildron Klinker. It soon became clear that there was no room for compromise on either side.