Moderation in the Pursuit of the Code Is No Virtue

Of all the complaints I see from the bot-aspirants, my favorite may be the one that goes, "The New Order used to stand for something good, but now they've lost their way." Granted, it's an insincere complaint; it only comes from random carebears, not from people who ever actually supported the New Order at any time. Even so, the argument makes me smile, because it's pretty close to an admission of the New Order's dominance in highsec. Remember when carebears used to say the New Order didn't exist, or that the Code was a joke? Now they admit it was right all along--but claim it is corrupted.

Here we go. Elayne Feather accused our Agents of departing from the Code. Elayne went further than most in professing her support for my "original beliefs". She supported the true spirit of the Code with all her heart, she said. Caution! Carebears don't always have hearts as big as yours or mine: 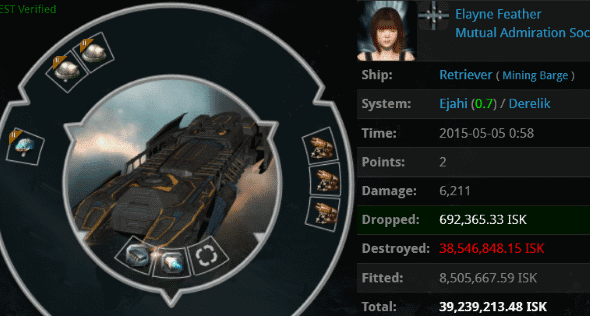 Elayne's heart didn't take her very far. She had no mining permit and was caught flying an untanked Retriever. I shudder to think of what Elayne would do if her heart was less than 100% in the Code, or if she opposed us.

Elayne was caught red-handed. Instead of apologizing, she saw in her punishment a jumping-off point for a rant about the New Order and its Agents. But even on this occasion, the proud miner couldn't quite bring herself to admit that she'd lost a 39 million isk Retriever--she was "set back 25 mil".

Then Elayne confessed that it wasn't even her Retriever to begin with. Somehow I doubt she apologized to her CEO for the way she'd misused the mining barge. She probably asked for another one, and then told the CEO she had growing doubts about his leadership style. 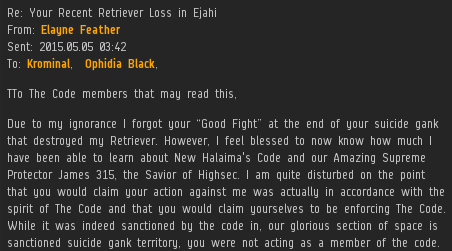 Before Elayne wrote to me about her disappointments, she penned an essay in which she lectured some of our finest Agents about the Code.

It became clear that Elayne was one of those "moderates" you sometimes hear about. While claiming to support the Code, she had a very different vision of the Code's history. Compare it to the true history, as documented in the pages of MinerBumping and other canonical works. One can hardly recognize this kinder, gentler Code of hers! Gone was the urgency, the moral imperatives, the calls for justice, the antimatter and brimstone.

Elayne couldn't conceal her biases. The valiant warriors who bested her Retriever in mortal combat were accused of being "second rate suicide gankers". Everyone knows our suicide gankers are first rate. In any case, they were good enough to kill her. 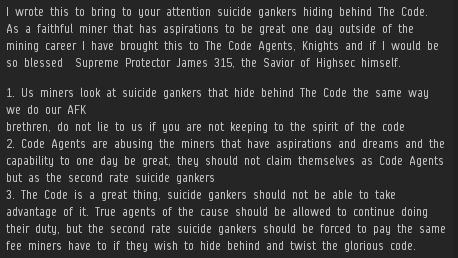 In a few haughty paragraphs, the miner dismissed years of indispensable New Order traditions that good highsec citizens have built their lives around. Then, with the utmost disrespect, she cast down our sainted Agents. In their place, she raised up her own, utterly unorthodox views of the Code. This was turning out to be one shocking EVEmail.

Elayne's missive did not go unanswered. Agent Kalorned leapt to the task, putting the miner straight by quoting from MinerBumping posts such as the stirring conclusion to Who You Gonna Call? Part 2:


There it was. Taylor Who--the new player who had never heard about the New Order or the Code or Agents or James 315 or tank modules or any of it--showed his true colors. He admitted he'd heard about the New Order. What he heard wasn't flattering or true, but he had heard of us. Even the new miners know about the Code. The New Order's presence is too big to ignore, even for a bot-aspirant. They don't need a "warning" before they get ganked. They've already been warned. Carebears of highsec, the time for warnings is over. The time for payment has come.

Powerful stuff. Even Elayne couldn't deny it. And this is why the New Order has established such a vast educational apparatus--so that the miners of highsec are not carried away like chaff in the wind by every new heresy that comes along. 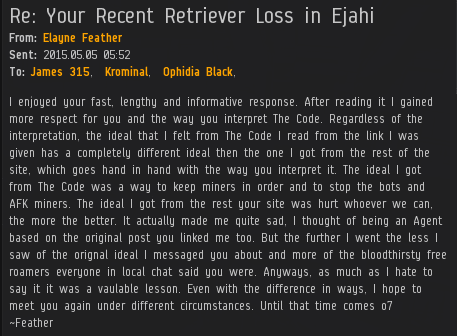 The truth is, the Code has never been soft. Our Code is not about leaving miners in peace, but driving them to submission. If they don't like it, I hear there's some good rental space out in nullsec these days.
Posted by MinerBumping at 19:15