Encounter with a True Newbie 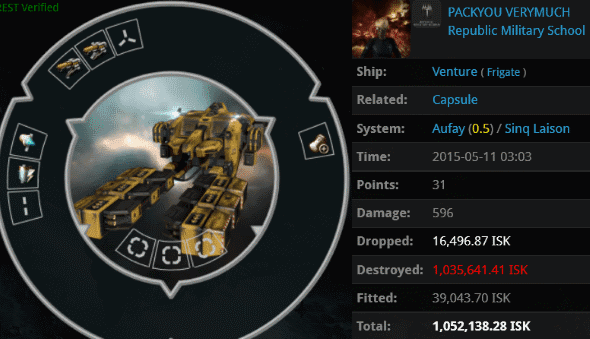 More often than not, though, people take care to package things efficiently. As a general rule, only small things come in small packages. Regardless, a small Code violation is still a violation. Agent Zane Arnolles caught an anti-tanked Venture autopiloting through New Order space and terminated it.

Ten minutes later, PACKYOU VERYMUCH saw fit to return to her keyboard and play some EVE. Her ship was missing!

The Venture was cheap, but Zane also popped PACKYOU's 43 million isk pod. Being a newbie, it was everything PACKYOU owned.

Normally, this would be the point where we would look at PACKYOU's employment history and discover that she's actually been playing EVE for six or seven years. Then she would say that she "just came back to EVE two months ago" or something like that.

...Not today. PACKYOU had only been playing for about four days. For once, a genuine newbie was killed. She must have spent her entire time mining in highsec to purchase the implants. She felt entitled to get them reimbursed. That's not how ganking works, though.

Our Agent explained to the newbie that isk is supposed to flow from the miner to the Agent, not the other way around. He wouldn't give her anything but what she really needed--the Code. Without warning, PACKYOU, the poor, defenseless newbie, vowed to bring destruction to the New Order.

PACKYOU underwent a dramatic transformation. No longer was she a pitiable, destitute newbie miner. Now she was the alt of a powerful, dangerous player. She even had a corp full of people who would do her bidding. What a twist!

The Venture pilot wasn't a miner after all. Nor did she need reimbursement for her pod. Ten million isk was small potatoes. She was rich.

Only minutes earlier, PACKYOU would have been a cause célèbre for the anti-ganking crowd. She would have been proof (finally!) that the New Order ganks brand-new players and robs them of their isk. Now, as PACKYOU bragged about her alts and her wealth, she became a living example of why all Code violators should be ganked at will.

PACKYOU ended the conversation a different person than when it began. It was startling--disturbing, even. Agent Zane knew what to do, though. He held to the Code. It had always worked in the past.

The New Order is a welcoming bunch. Even the most grotesque highsec personalities can send us 10 million isk and enjoy the benefits of compliance. 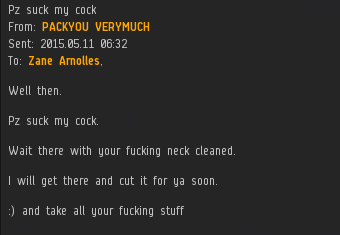 Some need more convincing than others. But rich or poor, young or old, the Code eventually comes to them all.
Posted by MinerBumping at 18:12