If a Boeing Lands on Your Skull

When an Agent of the New Order ganks you, it is standard protocol for him or her to send you an EVEmail notifying you of your obligations under the Code. Critics say that this is merely our way of fishing for tears. In fact, it's community outreach. It's also necessary, because when a gank recipient doesn't get an explanation, they usually ask for one anyway. For instance: 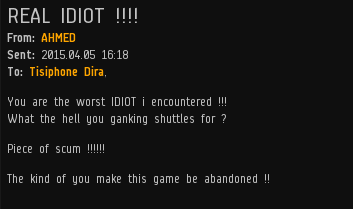 And because I know you so well, dear reader, I know what else you're thinking: How was the name "AHMED" not already taken a long time ago? Actually, it was. AHMED is a 2004 player. When Agent Tisiphone Dira ganked AHMED, she knew she would need special assistance in shepherding the wayward carebear to the Code.

Tisiphone enlisted the support of Agent Salah ad-Din al-Jawahiri and invited AHMED to join a Code-compliant complaint channel. At that very moment, AHMED was finishing up the EVEmail seen earlier.

For some reason, tempers tend to flare in EVE--especially in highsec. One of the services provided by the New Order is the creation of safe spaces for civilized discourse. Unfortunately, the only "safe space" most carebears are interested in is a 100% risk-free highsec theme park. They actually prefer risk in their conversations.

AHMED was willing to participate in the dialogue, but his motives were suspect. He used the channel as a platform for spreading hate and promoting the 1980s classic, "The Karate Kid".

In the movie, a youngster learns martial arts from an elite PvP'er who teaches him how to defend himself against bullies. The New Order performs a similar function in highsec: We mentor players and demonstrate how to PvP effectively. Also, we stand up to the bullies.

At first, AHMED couldn't grasp how this special training was going to help. He didn't see the benefit in getting his shuttle and pod waxed off by a Thrasher.

Though a bit cryptic, there was no denying that our Agents were filled with wisdom. It was time for AHMED to show some gratitude.

Not every student is a good one, however. AHMED needed much more training.

Then again, sometimes it is the teacher who learns something from his student.

In this particular case, there was nothing to learn from AHMED. He was full of nonsense. 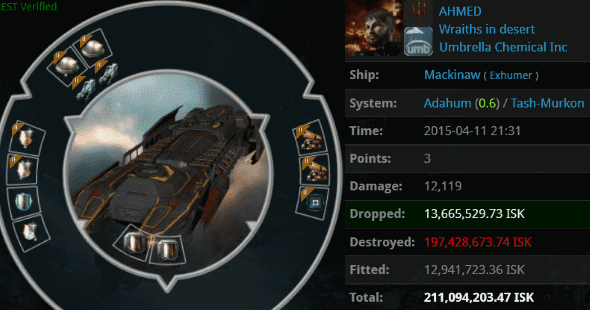 Sadly, AHMED continued to wander aimlessly. A few days later, a group of New Order Agents caught up with AHMED. They struck first and struck hard. AHMED could've learned PvP from the best, but instead he chose to become another 2004 character used for highsec mining. AHMED's potential remains unfulfilled. Will he get a sequel?
Posted by MinerBumping at 19:16