Diamond in the Rough, Part 2

Previously, on MinerBumping... Agent Tisiphone Dira made the journey to Hek in search of EVE players of a high enough caliber to join the New Order. Witnessing Code violators, Tisiphone struck them down and interviewed them to take their measure.

JN Alister claimed that he'd been AFK to take a "birthday phone call". It was time for Tisiphone to give JN Alister a birthday present, courtesy of the New Order.

It seemed JN's birthday had triggered some kind of mid-life crisis.

The gank recipient cursed the Code and again expressed his disdain for "rollplay".

Tisiphone judged the birthday boy to be unfit for service in the Order. Maybe next year.

Continuing her quest to find a diamond in the rough, Tisiphone met up with Elrond Peredhil, who was amazed to discover the existence of emergent gameplay. It was a close call: If Tisiphone hadn't ganked him, maybe Elrond never would've heard of the sandbox.

Elrond insisted he was too swaggy a motherfucker to be terminated. Yet he had indeed been terminated already. Tisiphone began to suspect that Elrond might not be cut out for the New Order.

Something was off--Hek wasn't producing high-quality players. Tisiphone soldiered on.

The next potential recruit was lined up and podded. Could this be the diamond of Hek?

Not likely. Hommer StoneHead wasn't even good at confessing his crimes.

In the end, Tisiphone didn't find any suitable EVE players during this trip to Hek. She was greeted by some fellow Agents, but the carebears she podded were all of low quality. 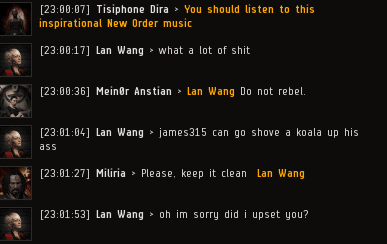 You might be thinking, "But the post is called 'Diamond in the Rough'. Where's the diamond, then?" Ah, dear, reader, that is bot-aspirancy. The bot-aspirant thinks that he can put in a set amount of effort and be guaranteed a predetermined reward. That's not how player-generated content works. To find a diamond in the rough, one must be prepared not to find one, because there's no guarantee of a diamond. Otherwise, it wouldn't be called a rough; it would be called a "place with a diamond in it". Everyone would go there. People would crowd into the roughs.

Tisiphone set out to find a diamond, enforcing the Code as she went, knowing she might find only bot-aspirants. That, in itself, is an extraordinary triumph of the human spirit.
Posted by MinerBumping at 00:24