The Man Who Didn't Know When to Comply, Part 4

Previously, on MinerBumping... Cody Fayden had a problem. He was addicted to decadent fittings and breaking the Code. Agent Nicolas Dupre aimed to cure the carebear by repeatedly ganking him. After each loss, Nicolas taught Cody something new about the game's mechanics. Cody was learning, but slowly--and at the cost of two blingy Mackinaws and two blingy Tengus.

I'm not a fan of PVP. I'm not really good at it and it does not interest me too. Of course I'm mad at you. What you´ll probably understand. And what you probably pleased. I must confess, what do you do you do well. Tactically, efficient and well thought out. Just why do not you do it in low or nullsec where people like you are. People who like PVP. Or people want to take the risk for more profit to be in danger. I just want to from time to time leisure of my work, my family and my life. Few missions, some ores, little research you know? It´s probally not fun for you but for me. But I can not do. because as you take my fun and I constantly have to fear being killed in hisec and loose my hard earned money and equipment ... so it does not make any sense for me anymore, and if you look how many people have left the game because of Gankern you should agree with me actually. Well ... would you even if you do not do it for me would probably get some other and make it ... so it's not matter anyway ... now I am going to be a bit of miners and probably sometimes afk ... So come and get your next Kill Tough Guy
Sorry for the English, i´ve not many time atm so i used googletranslate
Bye

Cody made it perfectly clear that he would never obey the Code. The rule against going AFK was a deal-breaker. Cody loved to go AFK while mining or even sitting around in a blingy mission-running ship. Previously, Nicolas earned a kill right against Cody because Cody forgot to activate his own kill right before attacking Nicolas. Then Nicolas used the kill right to destroy one of Cody's Tengus.

...Not quite safe. When Nicolas used the kill right to kill Cody's Tengu, he talked Cody into ejecting first. This spared Cody the loss of skillpoints, but it had a side effect. Nicolas had the opportunity to teach Cody about another quirk of the game mechanics: If someone ejects from a ship, you don't exhaust your kill right when you blow it up. Therefore, Nicolas still had a kill right against Cody. How unintuitive!

A week later, Nicolas caught up with Cody. The carebear had gone AFK in yet another Tengu.

Nicolas invited Cody to eject again, but the carebear simply had no fight left in him. He awaited the destruction of his ship.

As Nicolas invited others onto the imminent killmail, Cody returned. He spammed warp just after the Tengu popped. At least he didn't lose his pod. 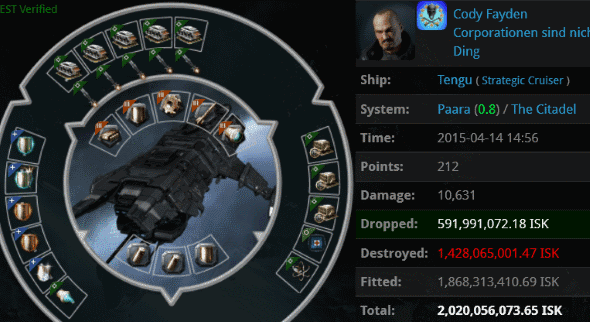 Cody hadn't lost his addiction to decadent fittings. It cost him another 2 billion isk Tengu. That was the third blingy Tengu he lost, all resulting from his original failure to activate his kill right against Nicolas before opening fire.

Cody had learned so much from Nicolas over the past several days. Or had he? 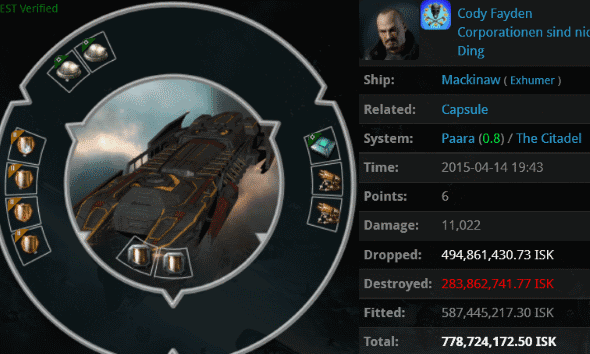 Only a few hours later, Nicolas caught Cody AFK mining in a 778 million isk Mackinaw in the same system. Cody, with 4 years in the game, was still mining in 0.8 security space. The gank required two Taloses, but it was well worth it. 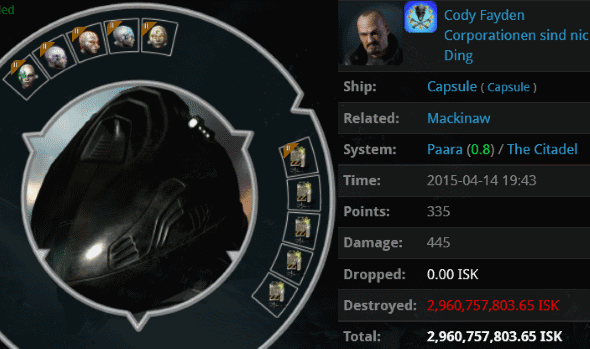 Two Taloses, and a Thrasher to pop the 2.9 billion isk pod. Of course Cody had a blingy pod. 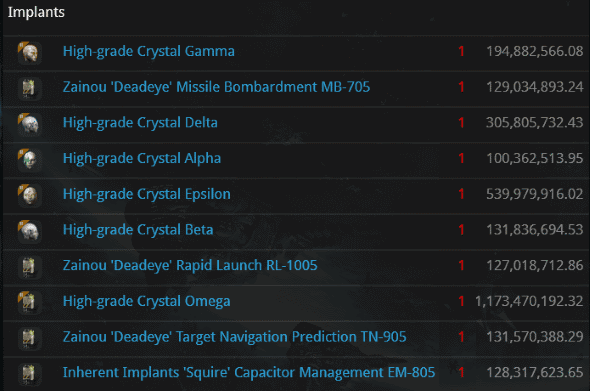 A pod which did, in fact, contain a crystal set.

Cody suffered greatly at the hands of Agent Nicolas, who personally saw to the destruction of three blingy Mackinaws, three blingy Tengus, a blingy pod and a 1.2 billion isk bounty--for a total of about 12 billion isk.

Cody finally decided he'd had enough. Highsec was too dangerous for him. How else can you describe a place where you can lose that much isk in so little time? The very next day, Cody left highsec and went to wormhole space, which he assumed couldn't be any worse.

And, naturally, once he made his way into a wormhole, this was the result: 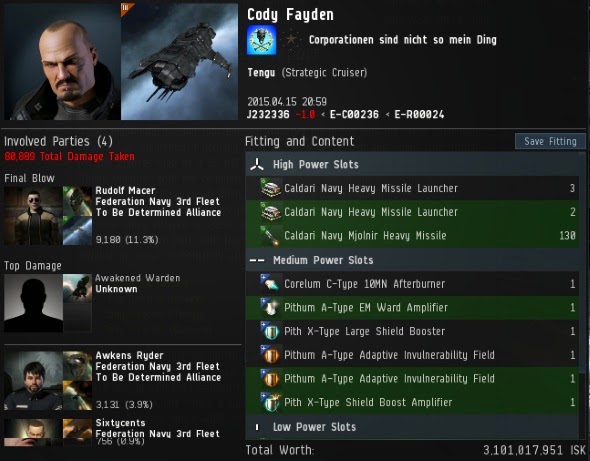 Cody still had a lot of learning to do. This, his fourth Tengu, was the most expensive one yet. 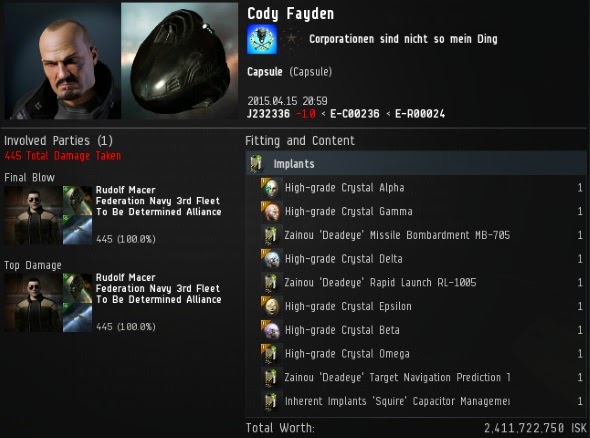 And he hadn't lost his taste for crystal implants. 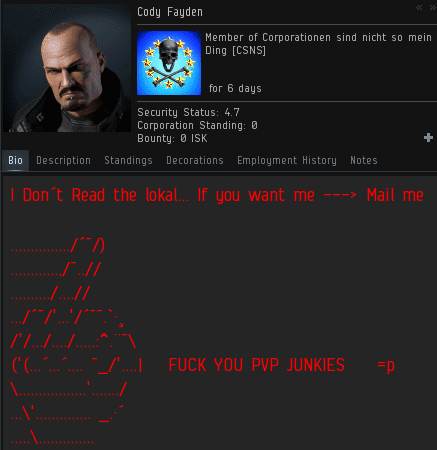 Cody Fayden remains a work in progress. I hope one day he can be satisfied with cheaper, more practical fittings. I hope he gains the wisdom to comply with the Code. Until then, I fear that EVE players in search of expensive killmails will continue to target Cody.
Posted by MinerBumping at 18:49