Someday They Will Answer for This

Even our most implacable enemies can't fail to admit the growing power and influence of the New Order.

Thanks to the marvels of social media, you can watch highsec's healing process in real time! Agent Kalorned's @NewOrderGamis feed is always buzzing.

You might assume that by now, everyone in highsec is educated. It's true that there are a lot more educated folks in highsec now than a few years ago. Yet much work remains to be done.

The good news: Education isn't entirely voluntary. We can force people to learn, even if they don't want to. It's crucial, because the carebears who need it the most usually want it the least. 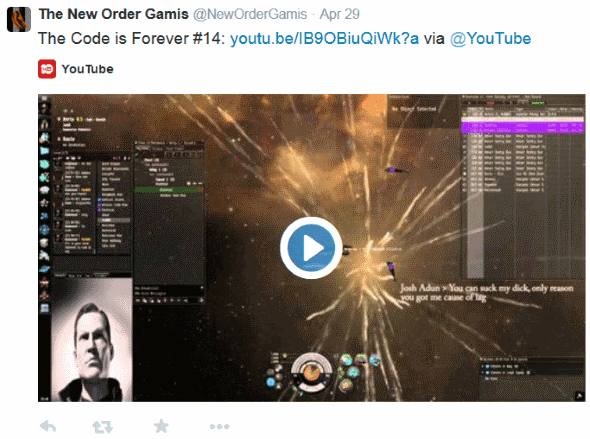 Every so often, another video in the "Code Is Forever" series pops up on the feed. Check out The Code is Forever #14 and be amazed. 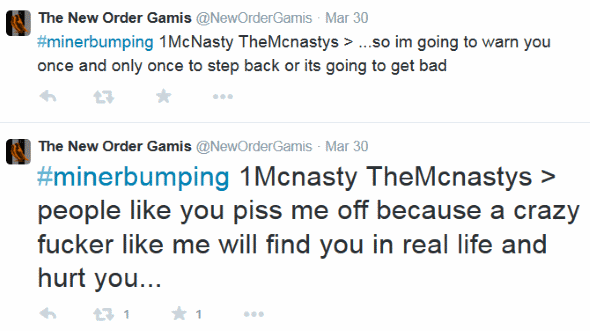 Speaking of people who need a proper education, 1Mcnasty TheMcnastys made a real-life threat against Kalorned--and then warned him that things were going to get bad. It's not a good sign when a carebear's first move is to make a real-life threat. Historically, it's a bad jumping-off point.

Nevertheless, threats of this nature can be ambiguous. Was he going to use resources to find Kalorned in real life, or in the game? Are his "resources" locator agents?

Don't be too quick to judge 1Mcnasty. He merely wanted to stick up for his fellow miner.

...And maybe some other stuff. He promised to contact Kalorned outside the game (in-game). 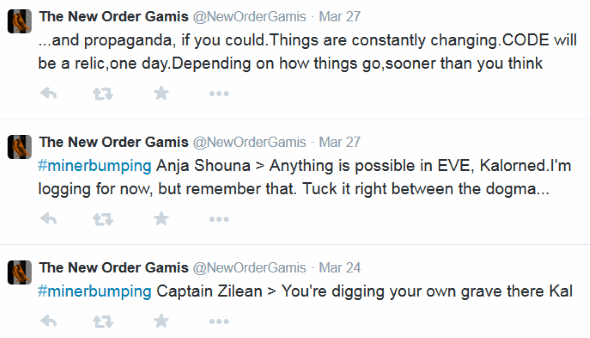 Though the New Order has reigned supreme in the face of all opposition for years, there's always somebody who thinks our downfall is right around the corner.

It's easy to be skeptical of these carebears. As the years go by, the only thing that changes are the real-world comparisons. Who knows? In another few hundred years, maybe carebears would compare the New Order to terrorist groups run by rogue cyborgs? If there were still carebears, I mean. We will achieve total victory in highsec long before the AIs take over. 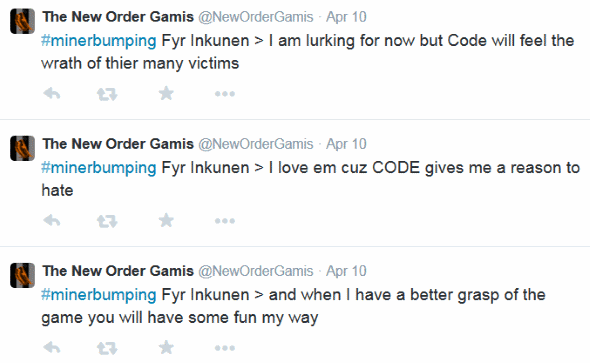 Then again, there's always some new danger out there. Fyr Inkunen thinks he might figure out a way to beat the New Order, after he learns more about EVE's game mechanics.

Our enemies believe that karma will catch up with us one day. But maybe it already has, and it's good karma? At any rate, it is the carebears of highsec who must answer to a power greater than themselves: Us.
Posted by MinerBumping at 17:38