You know your organization has hit the big time when it has its own diplomats. For quite a long time now, the New Order has had diplomats working around the clock. Their tireless efforts have contributed greatly to the image and reputation enjoyed by CODEdot and the New Order as a whole. 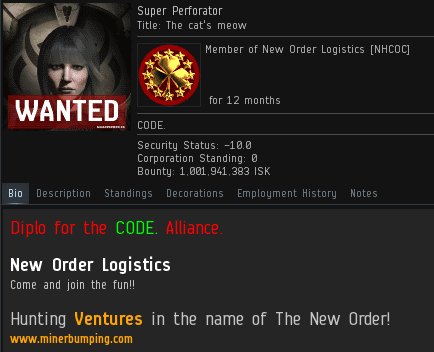 I know what all you skeptics out there are thinking: "Doesn't every wannabe corp/alliance have its own official 'diplomats'? Even the highsec industrial corps?" Maybe so, but our diplomats are different: 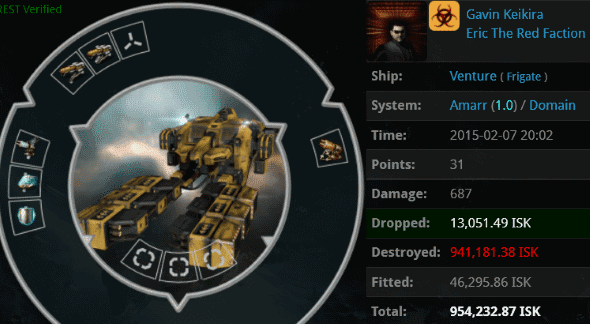 New Order diplomats get their hands dirty. Or clean, if you like. Agent Super Perforator went into a 1.0 system and ganked a Venture pilot during February's Venture-killing contest. Another diplomatic victory for the New Order!

The vast majority of the highsec citizenry understand the importance of destroying even the smallest Code violators. Killing Gavin Keikira's Venture was a smart move, from a diplomatic point of view. But Super Perforator wanted to go the extra mile, to convince Gavin himself that it was good he was ganked. Gavin sent a reply, hinting at revenge. 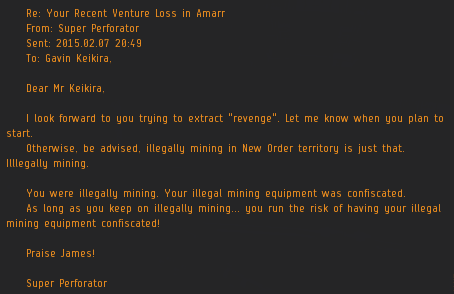 Aspiring diplomats, take note. Agent Super didn't beg for Gavin's approval. She wasn't obsequious or phony. Super Perforator is an Agent of the New Order. She let the miner know that she was in charge.

Gavin immediately withdrew his idle revenge threats and went the "didn't want that ship anyway" route. He was a bit hesitant to go all the way, though. Maybe he'd been spooked by Super volleying back his earlier spin. If Gavin had been totally committed, he would've said "this loss has already been replaced", like they say in nullsec. 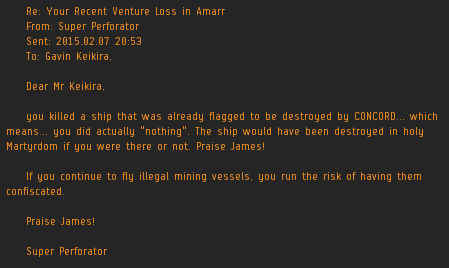 Now we see some of the subtleties of Super's diplomacy. She maneuvered in such a way that Gavin backed himself into a corner: By claiming to have destroyed the ganking vessel, he couldn't whine about being someone "who can't shoot back". Brilliant!

The bully card was played. Absurd. When was the last time you met a bully who worked as a diplomat? 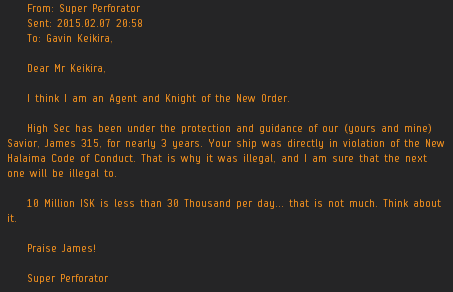 The New Order is resilient. Opposing us is like banging your head against a brick wall. No matter what the miner said, Super Perforator remained positive, closing each EVEmail with "Praise James!" By contrast, Gavin didn't praise me at all, despite having multiple opportunities to do so. What a Goofus.

Gavin wasn't on board yet, but at least he knew who I was. That's an important step. Only the most bot-aspirant of bot-aspirants don't know me.

Eventually, Gavin lost the willpower to continue his correspondence with our diplomat. The Venture pilot vowed to destroy our great movement. Super reassured the miner that he would be treated according to the laws and customs of highsec. Less than an hour later, Gavin purchased a new Venture and somehow got himself ganked again by some random people. I prefer to believe that Gavin got distracted, that he was preoccupied with thoughts about the Code. The New Order diplomat had given the miner much to think about.
Posted by MinerBumping at 18:51