The Grace of the Code, Part 4

Previously, on MinerBumping... Luiz Zirud seemed like a hopeless bot-aspirant. Agent Tisiphone Dira ganked Luiz while he was hauling two PLEX in a shuttle. But when Luiz was hauled into a court presided over by Lament von Gankenheim, the miner seemed to want to turn over a new leaf. Judge Gankenheim commanded the miner to pause his training of Mining V.

Within a few minutes, the miner found himself in a fleet channel with the very Agent who had ganked him.

Courtesy of the New Order, Luiz was provided with a fitted gank Catalyst, free of charge. Tisiphone walked Luiz through the basics.

BLAMMO! Luiz successfully ganked the Venture and popped its empty pod, all on his first try. Another victory for the New Order!

The tables had turned completely. Luiz, the autopiloting PLEX shuttler, had enforced the Code. 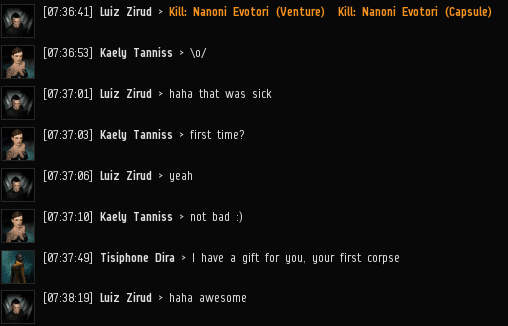 Luiz tabbed over to the courtroom channel and reveled in the glory of the Code. It was the first time he'd scored a kill in EVE.

Tisiphone invited Nanoni Evotori, the Venture pilot, into the channel. Luiz Zirud had climbed a mountain that day. He'd made it through ordeals and come out a changed man. Now, in looking upon his own gank victim, Luiz came face to face with the shadow of his past, dark self.

Over in the fleet channel:

Now Luiz saw EVE for what it was. All it took was a radical change in prospective--one only made possible by the grace of the Code.

Only a few hours earlier, Luiz might have found common cause with that carebear, that wicked bot-aspirant. He was rescued by Tisiphone Dira and her fellow Agents. Luiz's outlook on EVE would never be the same again.

And so the transformative power of the Code shone brightly once again. Each day, highsec is changing. Before the New Order, no one could ever have imagined such a thing. Now they can't escape it.
Posted by MinerBumping at 18:44