The New Order has achieved a very strong strategic position in highsec--and it's no secret. An unprecedented wave of pessimism and helplessness has hit the rebels these days. The forces of bot-aspirancy are in a state of total collapse.

Carlvagio, the New Order's third-largest shareholder, can see which way the wind is blowing. He purchased an additional 3,150 shares, further narrowing the gap between himself and the two shareholders above him. His purchase sent us over the 599, 600, 601, and 602 billion isk marks, earning him a Quadruple Supreme Protector's Tip of the Hat™.

Your eyes do not deceive, and neither do I: The New Order has sold over 600 billion isk worth of shares! And we're already on our way to the 700 billion mark.

As a side note, I would like to point out that ikryeverytiem bought an additional 400 shares shortly before Carlvagio made his purchase, with the 400th share being the 598,999th share we've sold--just one short of the 599 billion mark. Never be afraid to go the extra mile. Every single share counts. What a close call! Always err on the side of buying too many shares, as if such a thing were possible. Our shareholders never err; they always win! 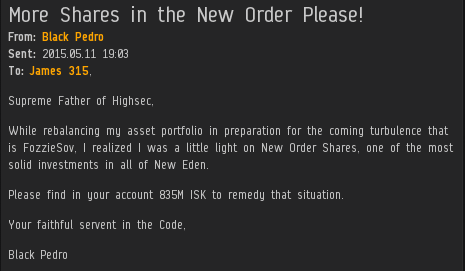 Trust. Security. Stability. Reliability. As an investor, Black Pedro values these things. No wonder he invested in another 835 shares. In doing so, he sent us over the 603 billion isk mark and earned a Supreme Protector's Tip of the Hat™. Now that's how you manage a portfolio.
Posted by MinerBumping at 20:06