The Man Who Didn't Know When to Comply, Part 3

Previously, on MinerBumping... Veteran miner Cody Fayden lost a series of increasingly blingy exhumers to the New Order, but he refused to buy a permit. Cody accidentally CONCORDed himself by failing to activate his kill right on Agent Nicolas Dupre, costing the carebear a blingy Tengu. Fearing even more expensive losses, Cody finally purchased a permit.

Several hours later, Nicolas paid a surprise visit to the carebear, who was running missions in a brand-new Tengu.

Despite four years of playing EVE, Cody had no idea that others could find him while he was grinding away in his highsec missions. Once again, only an Agent of the New Order bothered to help him learn the game.

Nicolas cautioned the carebear to always pay attention to local and obey the Code. You would think someone named "Cody" would remember the Code! But within minutes, Nicolas was shocked to see Cody go AFK. The carebear had relapsed.

Nicolas considered how to punish Cody for his crimes. He couldn't suicide gank the Tengu. Nor could he plant another awox alt into Cody's corp, most likely. A wardec would give Cody warning that he didn't deserve. Thankfully, there was one more option.

In an effort to make highsec safer, CCP created kill rights to be exercised by carebears who get killed by gankers. To make highsec even safer, kill rights are earned even by failed gank attempts. Remember when Cody shot at Nicolas without activating the kill right first? It gave Nicolas a kill right against Cody.

Nicolas activated the kill right and surprised Cody, tackling his new Tengu. Now it was time to kill the Tengu and see how blingy it was. However, Nicolas couldn't help but see the carebear in a new light. He'd grown used to being Cody's mentor.

If you die in a tech III ship (such as a Tengu), you lose skillpoints. Nicolas taught Cody how to eject from a ship and save his pod (and skillpoints). After four years of playing EVE, Cody had no idea this was even an option. 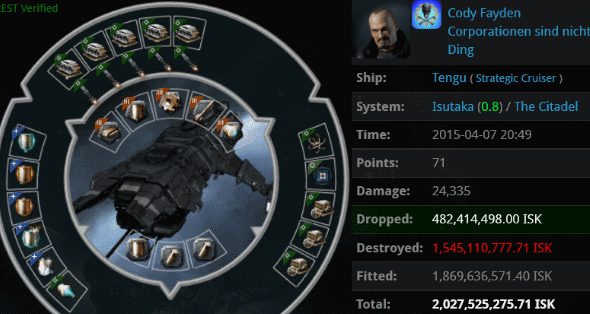 Cody ejected, and then Nicolas invited some other players to join in on the Tengu kill. Cody really hadn't learned his lesson; the Tengu was even blingier than the last one. It was worth 2 billion isk.

This loss was the most expensive yet. Even so, Cody was impressed by how helpful the Agent was in teaching him game mechanics.


Cody Fayden > you killed me often enough i think... now i doesn´t have any money... thats it for me
Cody Fayden > and obviously your not man enough to do it 1:1... in fact your an Ganker i think...
Nicolas Dupre > Well I just invited friends for this one because I wanted to share the joy
Cody Fayden > ah and all off you can fap now on my Tengu Wreck =)
Cody Fayden > than good fly and have fun to ruin that Game Kiddo, I get back to the Real Life and search for a other Game. A Game where aren´t Gankers like you and your little hard Boy Gang. Greetings at those

As the reality of the loss set in, Cody became increasingly focused on all the money he had lost at the hands of the New Order. He cursed the state of highsec and threatened to quit (again). 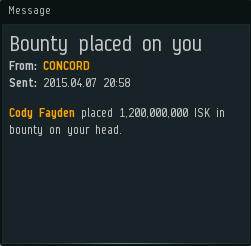 Disgusted, Cody threw away another 1.2 billion isk. In days, he'd lost over 6.5 billion isk. It was enough to knock sense into even the most hardened bot-aspirant. Still, Cody was addicted to bling and going AFK. If he fell from grace yet again, Nicolas would be there to catch him. He hoped he wouldn't have to. Another lesson would be costly indeed.