Highsec is strewn with the frozen corpses of those who paid the ultimate price for abandoning common sense and common Code. And it is continually refreshed, bathed each day in a sea of tears. No wonder people are becoming so optimistic these days about highsec's future!

Oh look, more of those tears I was telling you about. It must be time for another edition of the Grab Bag.

How many hundreds of times have we seen carebears complain about being shot when they had no guns? Maybe carebears should start carrying guns, then?

If you're so afraid of retaliation that you need to pay someone else to send me an EVEmail, maybe your constellation isn't the impregnable rebel stronghold that you think it is.

Meanwhile, residents of another region are trying to buy their independence. To answer Hushidh Amalette's question, I wouldn't sell even a single system of highsec for all the money in the world. It wouldn't be fair to all the citizens who expect and deserve the Code. 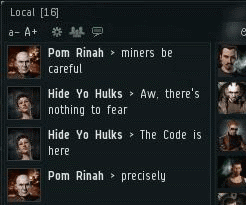 Ordinary EVE players draw great inspiration from the Code. Little newbies look at us and say, "That's what I want to be, when I finish the tutorial!" 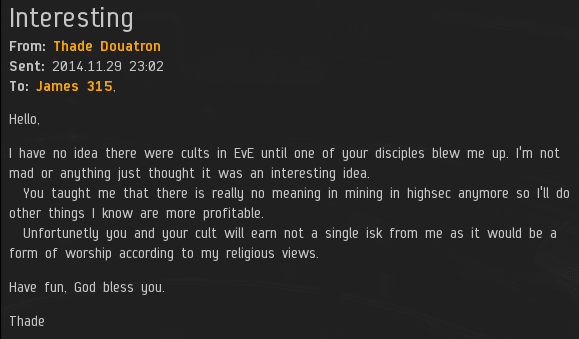 Issues of religious freedom aside, even people who reject the Code can be taught lessons about highsec mining. As the old saying goes, there's more than one way to skin a Hulk.

The Code's influence has spread rapidly. It leaps over borders and boundaries of all kinds. Formerly worthless in-game channels have been repurposed by the New Order. Now our Agents put them to good use, promoting the Code. They usually receive a mixed reception. 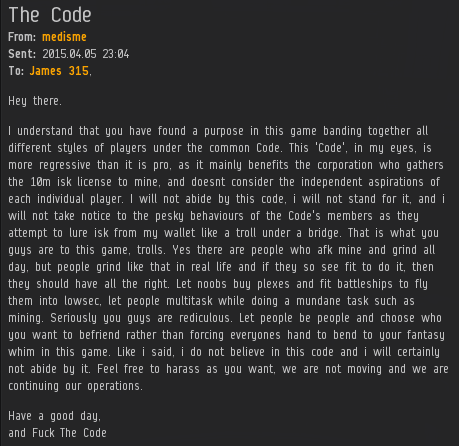 medisme's EVEmail followed a new trend where writers close with "fuck the Code" or some variation thereof. Whatever happened to "yours truly", "best wishes", or even "sincerely"?

The New Order's victories are based on the principles of asymmetric warfare. We put in a little and get out a lot. 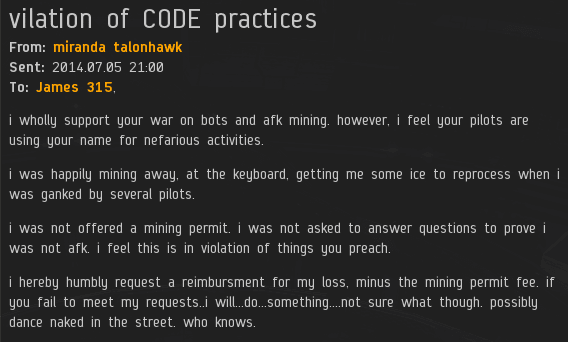 How can a miner take revenge? Most threaten to raise an army or destroy the New Order in some mysterious way. miranda talonhawk was more honest.

An honest question and an honest answer. Is that what carebears really want? Let's see:

Some people can't handle the truth. No wonder the Code upsets them so much--it delivers a very heavily concentrated dose.

Did you realize that for the price of a mining permit, you can put a bounty of 315,315 on 31 miners? Based on the reaction she got, Shailagh is probably one of ours, bro.
Posted by MinerBumping at 19:04