The Grace of the Code, Part 1

Nobody expects the New Order. They should, though--we always turn up when we're needed. 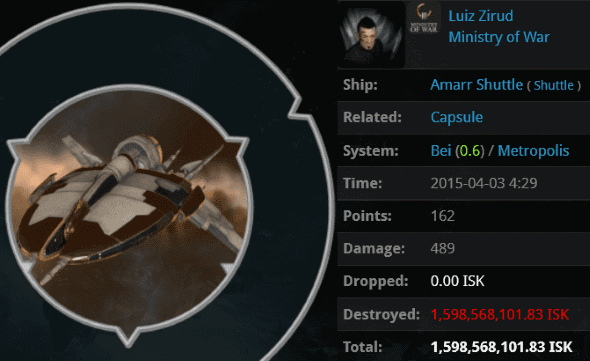 Luiz Zirud was mortified when his Amarr Shuttle was ambushed by Agent Tisiphone Dira's Thrasher. Luckily, it was just a shuttle, so no big deal. It was only worth... 1.6 billion isk? Say it ain't so.

Luiz needed help and a lot of it. Tisiphone jumped into her usual routine, but it soon became all too clear that Luiz wasn't interested. He simply wasn't engaging with the material. It was time for Tisiphone to teach Luiz a special lesson, to make the Code come to life for him.

Tisiphone spoke to Luiz in a way a bot-aspirant could understand. That is to say, she spoke the language of money. Though the killmail plainly indicated that both PLEX were destroyed, Tisiphone offered their safe return. All of a sudden, the disinterested carebear was hanging on her every word. Success!

Even so, there were warning signs ahead. Luiz hardly opened his mouth before the "I'm a new player" excuse came tumbling out. His character was a year and a half old.

Armed with Luiz's API, Tisiphone was able to specifically target the carebear and market specially-tailored products and services to him. When it comes to assisting carebears, privacy is overrated. Data is essential in modern highsec.

In return for the long-disintegrated PLEX, Tisiphone was to receive all of Luiz's ships. However, Luiz didn't know how to use the contract system. As is usually the case, the New Order Agent took time out of her busy day to explain aspects of the game that the tutorial didn't sufficiently cover.

Once Tisiphone had taught him how to create contracts, Luiz prepared to transfer ownership of his Omen. So far, so good. Then the carebear got cold feet. He was beginning to lose faith. 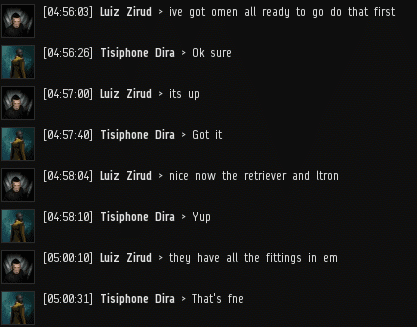 Our hero coached Luiz through his doubts. The Omen successfully made its way into New Order custody.

Luiz was quickly exhausting his willpower. He couldn't stop thinking about the PLEX.

Fortunately, Luiz had just enough strength to transfer the Retriever to Tisiphone. No more illegal mining for that barge.

At this point, rebels and skeptics are probably going to assume that Tisiphone was merely scamming the carebear. Not so. Tisiphone confirmed that Luiz was going to get everything that he had coming to him--and more. An Agent's word is always good. Tisiphone had every intention of showing the carebear the grace of the Code. It was a guarantee. Take it to the bank.

At the last second, something truly shocking was discovered. Luiz had a dark secret in his past that threatened to derail everything. Now he would need to prove himself. Was Luiz Zirud up to the challenge? Would he receive the Code's grace?