Previously, on MinerBumping... Fin Udan was given a second chance by the ISD. They'd decided not to ban him after he filled the Market Discussions subforum with spam--and profane attacks against the ISD members themselves. After a brief interlude, Fin launched a new assault, deploying tactical F-bombs in another round of abuse against the ISD.

Fin was greatly annoyed that his spam threads about "cult leaders" in the Market Discussions subforum were locked. Despite having escaped a mandatory permaban, he felt the moderators were biased against him.

Although the forum contained a number of fellow anti-Code posters, Fin was bitterly disappointed when he saw that no one else would rally to his anti-ISD crusade. If he didn't get banned for his behavior, he would biomass anyway.

Elizabeth Norn and others attempted to reach out to Fin. Assuming Fin didn't get banned for launching a second wave of personal attacks against the ISD, they hoped that they could reintegrate Fin into the Market Discussions community. But it was too late. Fin was cutting all ties, and he was no longer afraid to tell people what he really thought of them.

Finally, ISD Decoy responded to the ISD Decoy call-out thread. But instead of banning Fin from the forums, he merely removed the text of the post. For some reason, he didn't lock the thread.

ISD Decoy had his work cut out for him. He locked multiple Fin threads for rule violations. Meanwhile, Fin was busy posting more replies in the ISD call-out thread, which still wasn't locked. 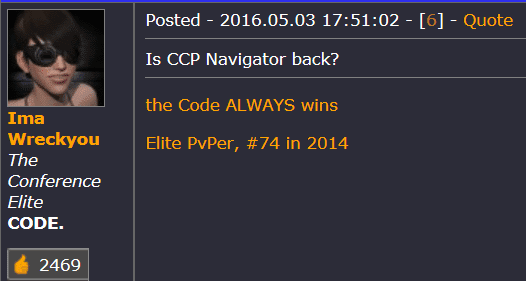 At this point, some readers might be getting the impression that the moderation of the official EVE forums has grown lax. Not so. Seen above is the post that earned Agent Ima Wreckyou a 14-day forum ban for "trolling". The post was deleted, but Eve-Search archived it. Ironically, Ima discovered she'd been banned from the forums when she prepared to post a reply in defense of the ISD member Fin was attacking.

As his siege of the subforum continued, Fin suddenly realized how strange it was that he was still allowed to post. He knew the moderators weren't sleeping, since they were locking his threads and deleting some of his spam posts. Yet they took no action against his account. In addition, Fin revealed that he hadn't received so much as a warning for his previous use of profanity against ISD members. This only made Fin even more disgusted with the ISD. 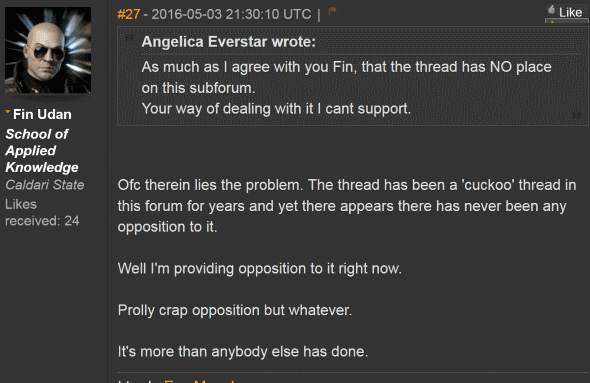 Fin alienated those who might otherwise have been inclined to support his cause. He didn't care. He remained entirely focused on his mission: Removing the "cuckoo thread" from Market Discussions.

"I see you! Cuckoo!" Somehow Fin managed to find a creepy way to express his belief that the New Order thread didn't belong.

Earlier, Fin had prepared himself for the worst. He fully expected to be banned at any moment, so he let loose with attacks against anyone who opposed him. Over time, he became more relaxed, if not much less belligerent. He was settling into his new role as the unbannable tyrant of Market Discussions.

Impossibly, the call-out thread remained open for business. As the thread grew, so did Fin's confidence. He checked his mail again. Still no warnings. Fin Udan felt unstoppable. How would Fin make use of this unprecedented situation? Would he behave more generously, making amends with his fellow posters? Or would he be driven mad by his newfound power?

To be continued...
Posted by MinerBumping at 20:00