A Mirror of Your Life, Part 2

Previously, on MinerBumping... Agents KoHfeTHbIu TpoLLb and Winnie Po0h ganked miner TC Luke, who said they were "like muslims burnin childs for mohamed." Even more outrageously, he claimed not to be a miner. Agent Agent GanKsta sent TC Luke an EVEmail about the Code in a courageous attempt to get the miner to change his ways.

TC Luke had replied that EVE is a mirror of its players' real-life activities. But as Agent GanKsta pointed out, TC Luke's own actions hadn't been stellar.

Adolf Hitler was very big on mining reform, from what I've been repeatedly told over the years.

TC Luke mourned CCP's loss of money. In truth, he'd probably be happy to see CCP go bankrupt if it meant he got an extra unit of Veldspar in his ore bay. What a lack of empathy and compassion on his part.

The miner then made a rapid-fire series of comparisons: The New Order was like the mafia, Hitler, Stalin, the United States of America, and Islam.

Agent GanKsta told him to calm down. 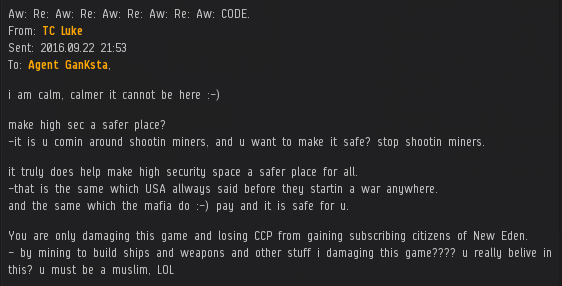 Some people accuse the United States of being anti-Muslim. However, TC Luke was convinced that the New Order was exactly like American foreign policy and Muslims.

TC Luke's EVEmails grew more and more frantic. He came up with all sorts of reasons to excuse his failure to pay our Agent 10 million isk.

Honestly, miners like TC Luke could save themselves a lot of time and energy if they'd just suck it up and obey the Code.

TC Luke's next argument would've been more persuasive were it not for the fact that we do know better than CCP. 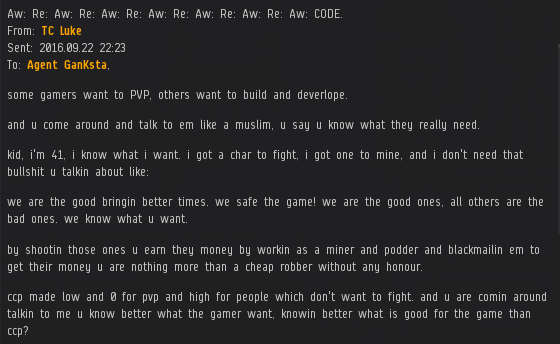 It's frightening--this EVEmail was the culmination of all of TC Luke's 41 years of wisdom and experience.

The miner freely admitted that he'd already read the Code before. As usual, the carebear had plenty of warning prior to being ganked.

Agent GanKsta hoped that TC Luke had gotten all the nonsense and anger out of his system. Our Agent prepared to receive the 10 million isk he was due. 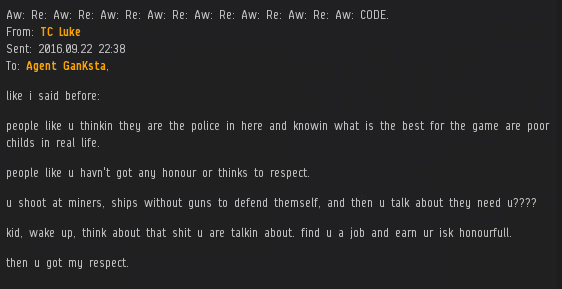 No such luck. This miner still had plenty of nonsense and anger still left in him.

Sometimes carebears talk about the need for earning trust, respect, honour, etc. However, our Agents--simply by becoming Agents and enforcing the Code--have already earned the respect of highsec. They've reached the highest level of gameplay in EVE. Agent GanKsta looked forward to receiving proper credit from TC Luke, once the cloud of bot-aspirancy was lifted.
Posted by MinerBumping at 18:41