A Skiff Is Not a Permit, Part 4

Previously, on MinerBumping... Neuromancer X abandoned his mining permit in favor of a Skiff, only to be taken down by a New Order gank fleet that very same day. Agent Alt 00 offered Neuromancer chance after chance to make things right. But the miner refused to see reason.

Word spread of Skiff deaths in and around the Hek trade hub.

The miner had refused Alt 00's generous offers to let him return to the fold. Our Agent still wouldn't give up, though.

Highsec miners tend to blind themselves to the reality of life in EVE. They can rarely see beyond the asteroid sitting in front of them. The only content they get is the content we give them.

Alt 00 cautioned Neuromancer yet again. She and her fellow gankers had made it obvious that there was no such thing as an invincible mining ship. If Neuromancer wanted to mine in highsec, the Code was the only option.

There could be no doubt about the extent of Neuromancer's nihilism. Alt 00 wished the miner well--but had little hope of rescuing him from his self-inflicted annihilation.

But after a few days, Neuromancer saw the light.

This is why the New Order never gives up. Our Agents know from experience that the CODE always wins. Always! Alt 00 was delighted to learn of Neuromancer's change of heart. Even so, Neuromancer's crimes weren't merely against Alt 00 and the Hek asteroid belts. Neuromancer had rebelled against the Saviour of Highsec. 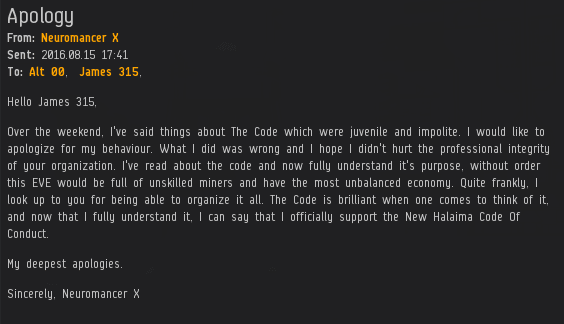 It was only appropriate, then, that the miner sent an apology directly to me. You might be surprised how many apologies I get in my inbox these days. 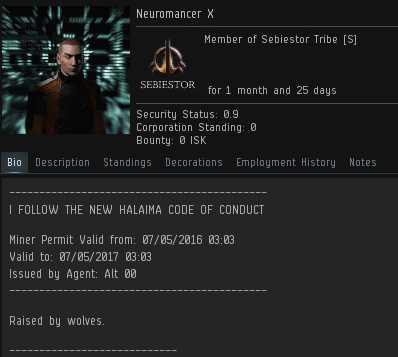 Alt 00 allowed Neuromancer the privilege of restoring his mining permit to his bio. This time, he put the permit right at the very top--where it belonged. 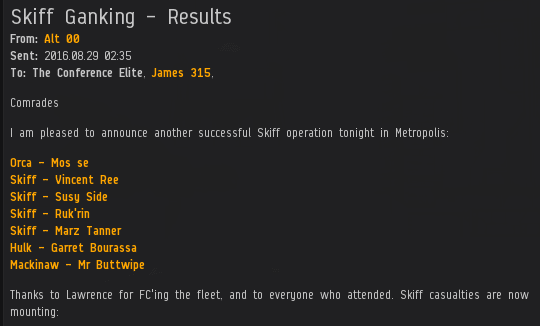 Neuromancer made a wise decision, for Alt 00, Lawrence Lawton, and their fellow Code enforcers continued to target non-compliant Skiffs for destruction. The Code requires miners to fly tanked ships, but a Skiff hull is no substitute for a permit. The New Order's control of highsec grows stronger by the day.

And as for Neuromancer X? He soon realized that highsec mining, even as a Gallant miner, isn't a great way to spend one's time. He abandoned the highsec asteroid belts and went in search of adventure in nullsec. Alt 00 had rescued him after all.
Posted by MinerBumping at 18:26