A Skiff Is Not a Permit, Part 3

Previously, on MinerBumping... Hek resident Neuromancer X carefully concealed his mining permit and violated the Code. After Agent Alt 00 ganked his Covetor as punishment, Neuromancer removed the permit from his bio and took shelter in a heavily tanked Skiff. He challenged our Agent to gank him again. 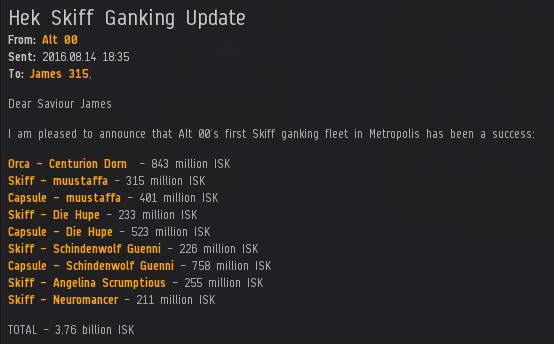 Alt 00 returned to Hek with a fleet and began eliminating Skiffs one after another.

The miners were shocked and humbled by the unexpected demonstration of New Order firepower.

...And no one was more upset than Neuromancer himself.

Neuromancer rejected the timeless wisdom of the Code in favor of a tanked Skiff's EHP buffer. Only now did the enormity of that mistake dawn on him.

When he'd first undocked in his precious Skiff, Neuromancer was defiant. He invited Alt 00 to try ganking him, and he even even told Alt 00 which asteroid belt he was mining in at the time. Never tempt an Agent. Neuromancer's attitude underwent a dramatic transformation after the gank.

Alt 00 had shown incredible generosity toward the miner. She'd offered to restore Neuromancer's mining permit, free of charge. Neuromancer chose to spend a bunch of money on a Skiff instead.

Neuromancer's world came crashing down around him. He treated the Hek trade hub to a public temper tantrum. 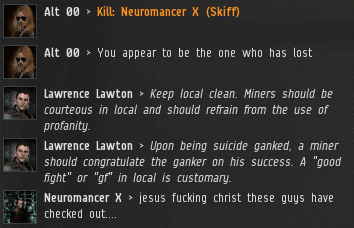 Plenty of highsec dwellers enjoy seeing people oppose the New Order. But it's hard for anti-Code sentiment to gain traction when it's coupled with an embarrassing killmail. Results matter. 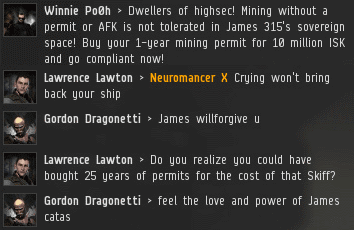 It was only natural that public opinion began to shift in favor of the New Order and the Code. 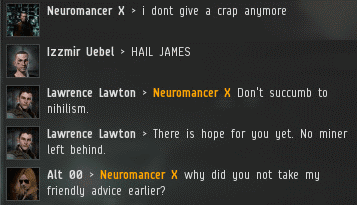 If Anti-Gankers and tanked Skiffs can't protect a miner, why not give the Code a chance?

Alt 00 still cared about the miner. She's always willing to go the extra mile for anyone who buys a permit, even if they fall short of perfection later. Neuromancer knew he'd been lied to by the pro-Skiff crowd, but he was too humiliated to go back to the Code. Could our Agent manage a last-minute rescue, or would Neuromancer descend more deeply into the abyss?