When it comes to PvP in EVE Online, Uedama is the big leagues. 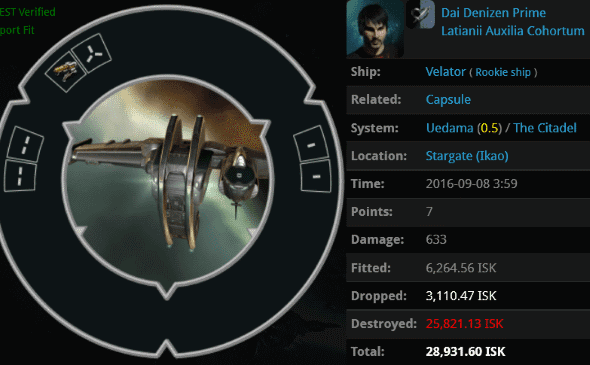 Agent Chapo Muerte got an opportunity to show off her skills when an intruder armed with illegal mining equipment broke into Uedama. Chapo's victory over the miner's Velator was swift, graceful, and impressive. Her triumph was made all the greater by her successful follow-up performance against the miner's pod.

Dai Denizen Prime immediately retaliated. "Immediately" upon his return to his keyboard, I mean.

The miner seemed to believe the shooting was unjustified. Chapo nipped that idea right in the bud.

It was then that Dai made a startling accusation. Perhaps Dai meant that he was a newbie, but that wouldn't make sense, given that he'd been playing EVE for over six months. There was another possibility...

Miners often use their babies and small children as an excuse for going AFK at the very moment they were ganked. That's not the worst of it, though.

Some miners force their small children to mine and then complain to us when they get ganked. Is it possible that Dai was actually some miner's baby? 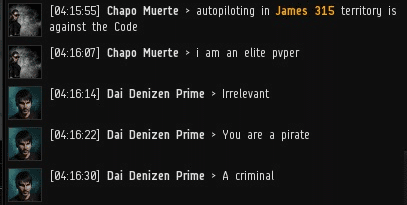 Dai was unimpressed by Chapo's credentials. He didn't think much of the law of highsec, either.

The miner was clearly in the wrong, but he wouldn't accept the blame. There was nothing out of the ordinary about that. If Dai was some miner's child, he'd been raised in their image. 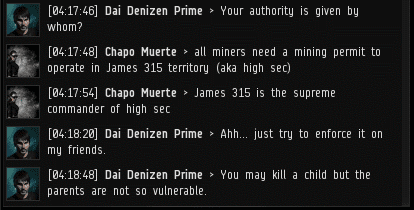 Dai again invoked his status as a juvenile. The Code doesn't make any exceptions for minors, though.

Dai's parent or parents belonged to the DARKNESS. alliance, apparently. So what? Their killboard stats are not nearly as impressive as the mighty CODE. alliance's. 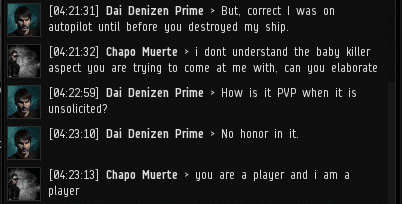 Chapo's persistence was rewarded with a full confession of Dai's criminal act.

If everyone has their own code of ethics, it's not really a code--or ethics. It's just everyone doing whatever. That's why total conformity to the one true Code is required. Even a child like Dai should be able to understand that. 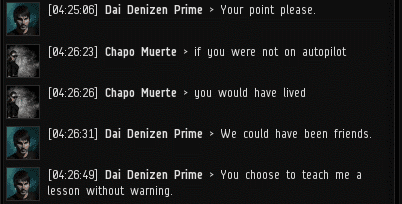 The ungrateful miner admitted that he'd been taught a lesson, though he didn't appreciate it because he wasn't given advance notice. I suppose he wanted to put the surprise inspection on his calendar. What a farce!

As Dai would have to concede, unexpected ganks are the most memorable ones. Dai wouldn't forget Chapo or the lesson she taught him. Chapo doesn't kill babies; she helps them learn and grow. It takes an Order to raise a child.
Posted by MinerBumping at 15:40