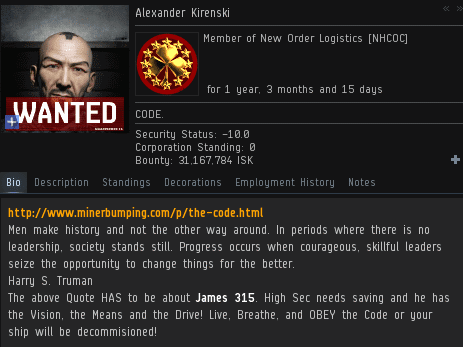 Many dream of paradise. Few take action to create it. They are called Agents of the New Order. 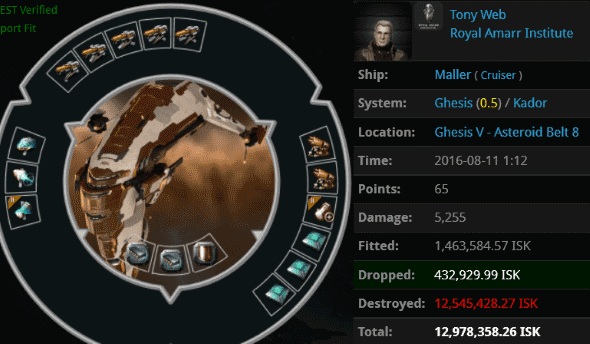 Does a ship like this one belong in a perfect highsec? Agent Alexander Kirenski didn't think so, so he removed it.


Tony Web > Was on eve for six years before I got sick ... staring new ....
Alexander Kirenski > Well then, you should know all about the Code
Tony Web > you gave no warning pretty low
Tony Web > my last toon would have kicked your ugly ass

The Maller pilot, Tony Web, complained in Ghesis local. He managed to invent a new twist on an old miner cliché: I have a powerful but unsubscribed alt.

Tony offered no explanation for why he no longer had access to his impressive former character. He deflected by trying to get our Agent to go to lowsec. Nice try!

Alexander was critical of Tony's mining Maller fit. But Tony presented himself as an expert on the subject. He'd used the horrible fit because he knew something Alexander didn't.

Despite claiming to have played EVE for six years, Tony considered himself a "helpless newbie". If he wanted to go that route, maybe he shouldn't have spoken up about his secret past.

For some reason, Tony offered additional information about his former character: He'd amassed a fortune of 45 billion isk. All of it was inaccessible now. Perhaps Tony was banned for botting and/or RMT? In any case, he was down to 10 million isk. Plenty for a permit, though.

Tony needed help--that much was obvious. Alexander extended the hand of friendship, which came with some good advice at no extra charge. Tony rejected it. And carebears wonder why they have no friends.

Although Tony spent all of his time mining in highsec, he did not consider himself a miner. He still identified with his mysterious former character.

Tony denied that his Maller was a mining ship. Apparently he forgot about killmails; Alexander happily linked the kill in local so everyone could see its fit. Tony couldn't do anything but sport a Veldspar-eating grin. He knew he'd been caught.


Brant Deninard > such fit should not exist...
Alexander Kirenski > it doesnt anymore
Busty Lust > omg
Tony Web > hey it was working....hehe
Tony Web > any one of you generous miners can offer me some isk for a real ship....lol
Busty Lust > tony you really need to learn to fit ships correctly, go look on batteclinic or get evemon or something

Random onlookers in local couldn't help but click on the killmail out of curiosity. They were stunned by the Maller fit.

Tony still refused to accept any advice. He didn't have any good excuses for his Maller fit, so he prepared to offer up a bad one:


Alexander Kirenski > there are 3 ventures for sale in Dresi, for get this, the low low price of 350,000 isk
Tony Web > i am training for combat... getit
Tony Web > like i said ... not a real miner
Tony Web > i know about all of the lovely ships
Tony Web > you guys try an see how far you can train i five days

Tony wouldn't use an actual mining ship because he wasn't a "real miner". Since he was a combat pilot, he would only use a combat ship for mining.


Busty Lust > im trying to help you, whats with the attitude... so why you half assed fitted that ship for mining with a cargo scanner of all thingss. if you want to learn, listen, if not enjoy getting killed time and time again,
Busty Lust > fool
Tony Web > so thanks again Alex
Alexander Kirenski > yup yup, i imagine i'll be seeing you around

Sensing that he was on the losing side of the argument, Tony waved goodbye. Everything that had transpired only pushed more people to the New Order's way of thinking. The Code won the day, as it always does.
Posted by MinerBumping at 19:37