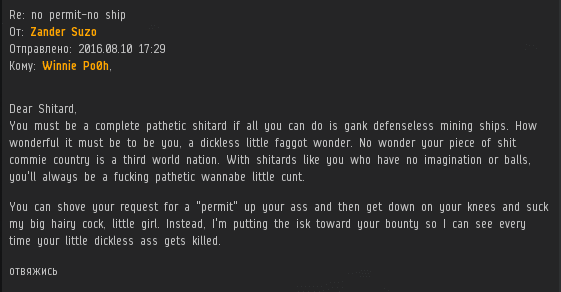 An EVEmail like this can mean only one thing: It's time for another edition of the Highsec Miner Grab Bag! 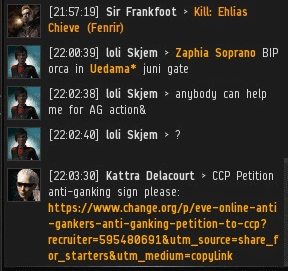 Like "Anti-Ganking", the "Gank Intel" channel is a place where people can go to request help from the helpless. Normally carebears send their petitions directly to CCP, but Kattra Delacourt had another idea: A Change.org anti-ganking petition. 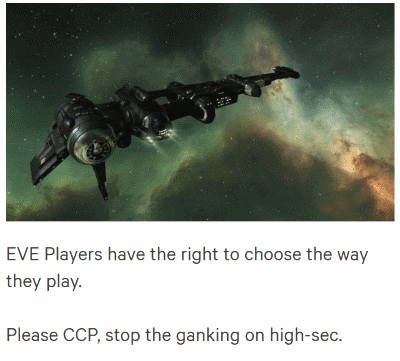 I like the picture of the Catalyst. In fact, if you remove the last sentence, this would be a pretty good pro-ganking petition.

DarK AngeL5005 is typical of the lazier breed of anti-Code rebel. Not only did she merely threaten to send threats--she couldn't even be bothered to send the threats until later, whenever she had time. Miners are notorious for going AFK while mining to feed themselves, but they also go AFK in the middle of whining sessions.

MinerBumping's The Battle for Aridia series was quite the summer blockbuster. Check it out! (In some locations, it's sold under its alternate title, "Aridian Knights".) They were even talking about it in the Anti-Ganking channel.

Anti-Gankers take the fun out of everything. Instead of enjoying the series, a rebel complained about his fellow Anti-Gankers' inability to stop the New Order's adventures.

Yeah, just report stuff to the Anti-Gankers and ask for help. I'm sure they'll get right on it.

Carebears always try to have it both ways. They call us sociopaths, but when we express our empathy, they get mad at us for that, too.

Something in Comfortable-Yiran DC's message got lost in the translation, but it looks like he's a nihilist. I do agree with him on one point, however. I, too, have long suspected there was a dog in the manger who people in the world. 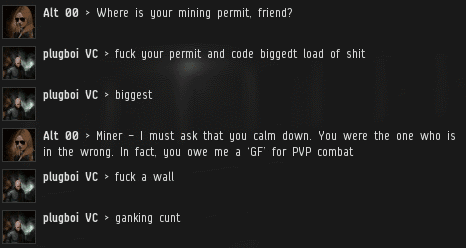 It's not a good time to tell our Agents to "fuck a wall." There's a good chance you'll hear some variation of "We're gonna build a wall and make the highsec miners pay for it!"

Judging by the last four years, it seems mercenaries may not be the unstoppable force of nature we've all been led to believe.

In reading this, you might assume that BlackWolf Inkura is a member of an alliance with 785 other people. Actually, he belongs to an NPC corp. Maybe he has 785 friends on Facebook?

BlackWolf left the last corp he was with because "there was little to no activity with them." The corp's name? Death to CODE. No wonder. The CODE always wins. Always!
Posted by MinerBumping at 17:54