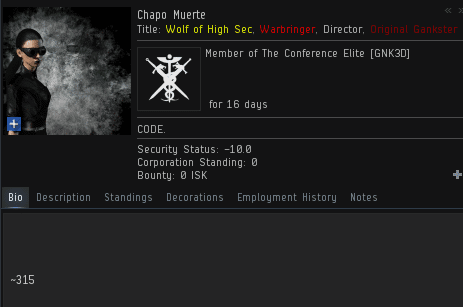 Do you know Chapo Muerte? If you're a non-compliant freighter pilot, you'll probably meet her someday soon. She's an Agent of the New Order and she's taking the ganking world by storm. 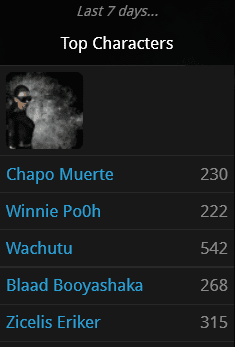 According to zKillboard's most recent weekly rankings, Chapo is the number one PvP'er in the entire game--beating out fellow CODE. member Winnie Po0h. During her first two weeks in EVE, Chapo participated in the destruction of more than 80 freighters. She's certainly making her presence felt in Uedama. A presence the system hasn't felt since...

But sheer gank efficiency is not the only measure by which the New Order values its Agents. Courtesy, decency, generosity, and humanity are treasured among our Agents--despite being exceedingly common among them. When Chapo heard that HikariLight Dallocort lost a fail-fit Retriever, she immediately stepped in to help.

Chapo's compassion for the miner was palpable. HikariLight immediately felt at ease with her. 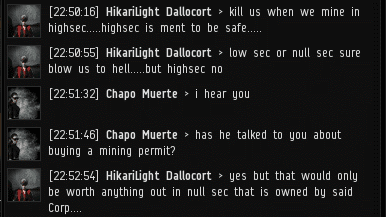 From the outset, Chapo reassured HikariLight that she wouldn't push her values or her agenda on the miner. HikariLight, on the other hand, was aggressive in espousing her theme park point of view. 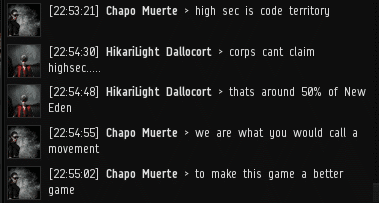 The miner was laboring under an incorrect assumption about the game. As we know, most territorial claims in EVE do not involve the in-game sovereignty mechanic. Also, CodeSov. 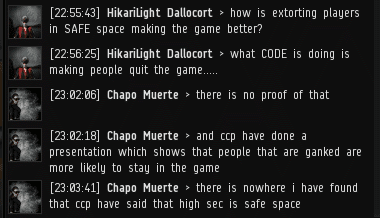 With the patience of a saint, Chapo dispensed with the myth about gankers negatively affecting player retention rates. 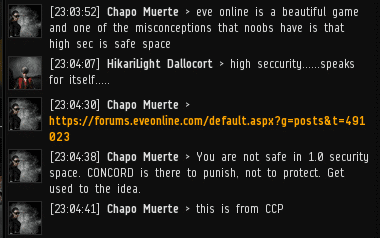 Though CCP doesn't officially recognize them as an in-game resource, Agents of the New Order are virtually part of the tutorial these days. An essential part. At a moment's notice, Chapo was ready to give HikariLight a link to the 8 Golden Rules for EVE Online, posted on the forums by none other than CCP Phantom himself.

As our more seasoned readers will recall, CCP Phantom used the "no ranting" rule as an excuse to lock my groundbreaking Manifesto and Manifesto II threads, which formed much of the ideological basis of the Code. It's a sign of how far we've come that now Phantom has posted a thread which validates so much of what I've been saying all along. Cheers!

Highsec miners are rarely dangerous, but they're most volatile when cornered. HikariLight had been disarmed of all her nonsense. She was forced to confront the truth. And she didn't like it.

Chapo promised that she wouldn't promote an agenda or force her beliefs onto the miner. She kept that promise. Instead, Chapo merely informed her of the truth. She basically fact-checked the miner. 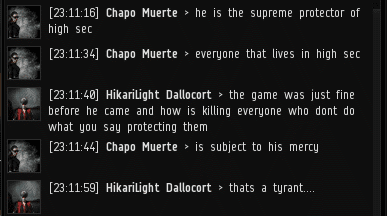 In a moment of supreme hypocrisy, HikariLight accused me of being a tyrant. This from the miner felt entitled to do whatever she wanted, who refused to obey any rules, and who wouldn't even consider the wants or needs of anyone else in highsec. My friends, that is a tyrant. 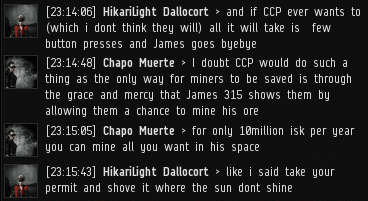 Chapo supplied the miner with some additional facts, but HikariLight wouldn't listen. Along with the CCP-endorsed Golden Rules, she'd been given a golden opportunity to buy a mining permit. She didn't care; it was as if she didn't want to succeed in highsec. Nevertheless, Chapo Muerte had done her part. The miner failed her teacher and herself. Even so, as long as she remains in highsec, she'll have more opportunities to redeem herself.
Posted by MinerBumping at 17:22