It's hard to believe these days, but once upon a time the carebears widely believed that the Crimewatch bounty system--implemented in late 2012--would somehow destroy the New Order. They were wrong. In fact, most people consider the current bounty system to be pretty worthless. But it does have its uses.

New Order scientists discovered that carebears have an adverse reaction to having bounties placed upon them. They are particularly sensitive to bounties of 315,315 isk, or any other amount that ends in 315. The carebears of highsec know that it is the number of my name.

Agent Galaxy Mule successfully infiltrated the Anti-Ganking channel using an alt. (The name of that alt will be kept classified for the time being.) The spy gathered the names of Anti-Gankers in the channel and Galaxy Mule began placing the mark of 315 on them. 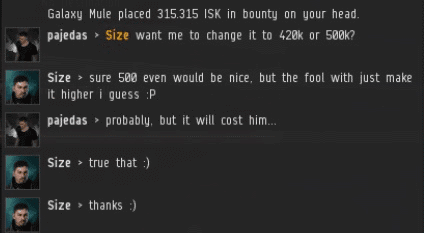 Galaxy Mule set a bounty of 315,315 isk on Size. He complained about it to his fellow rebels. In a rare display of generosity, Anti-Ganker pajedas offered to spend up to 184,685 isk to change his bounty!

The spy witnessed pajedas interfering with the bounty. Now pajedas was marked himself. 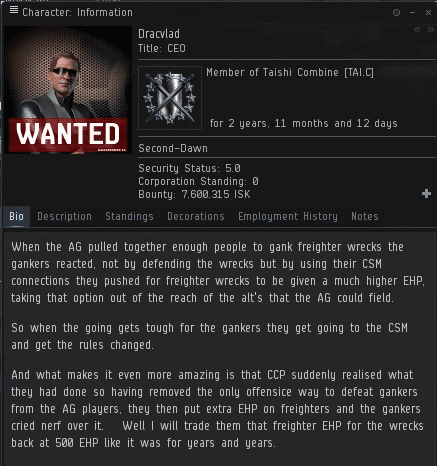 Anti-Ganker chieftain Dracvlad sympathized. A grizzled highsec veteran, he'd witnessed many Anti-Ganker defeats and had grown bitter. I often say that the Anti-Gankers see the world in reverse. Dracvlad was no exception; he felt CCP has done too much to buff ganking over the years. 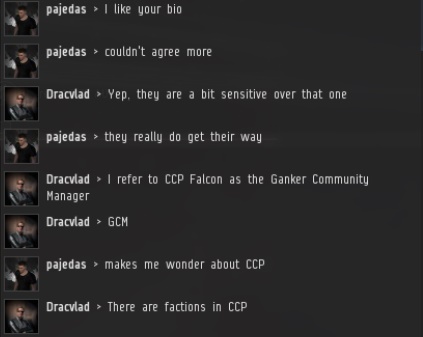 pajedas tried to cleanse himself of the mark of 315, but Galaxy Mule restored it. In another example of the twisted prism through which Anti-Gankers view the world, Shalishaska Laoch complained that CCP is biased when it comes to policing players' language--biased in favor of gankers!

Dracvlad coughed up a small amount of isk to modify pajedas' bounty again. But the problem of Galaxy Mule's spy alt remained. As long as he was present in the Anti-Ganking channel, the bountying would continue.

Moderator Jennifer en Marland hunted down the spy and banned him from the channel. Jennifer assured everyone that the channel was safe again, all thanks to her superb detective work. Finally, a victory for the Anti-Gankers! But something wasn't quite right. Anti-Gankers are incapable of victory; they only know how to fail. Besides, if Galaxy Mule's spy alt was kicked out, then who took that screenshot?

As it happened, Jennifer didn't find the spy. Instead, she banned one of her fellow Anti-Gankers from the channel by mistake. The toxic, paranoid atmosphere of the Anti-Ganking channel asserted itself once more.

As for pajedas, he continued to struggle with his bounty. Let the carebears of highsec beware: The mark of 315 may come upon you at any time!
Posted by MinerBumping at 15:55