A Skiff Is Not a Permit, Part 2

Previously, on MinerBumping... As the New Order's power and influence continue to grow, our Agents increasingly focus their attention on non-compliant Skiffs. Not only are Skiffs a lot more common in highsec these days (entirely due to our actions), but our Agents are also more equipped to deal with these heavily tanked nuisances. 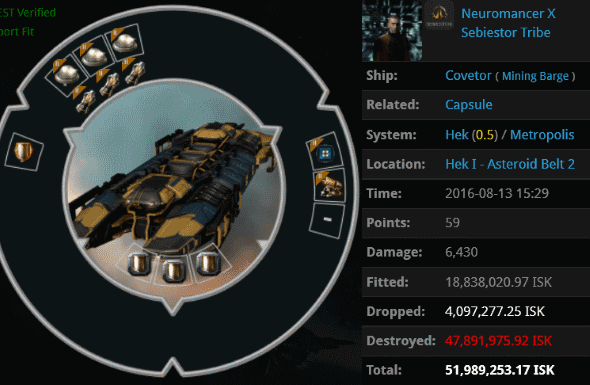 Just prior to organizing a Skiff-ganking fleet, Agent Alt 00 conducted a routine examination of the Hek system. There she found an apparently unlicensed Covetor. It was tanked. If you can think of a Covetor as being tanked, that is.

The pilot, Neuromancer X, immediately invited our Agent to a private convo. He claimed he owned a permit--and offered a novel excuse for burying it at the very bottom of his bio.

As Alt 00 pointed out, mining permits are not meant to be hidden. From the beginning, some miners have shied away from expressing any allegiance to the Code, for fear of retribution from their fellow miners. As if they should be more afraid of AFK carebears than of the people who gank miners!

Neuromancer insisted that he hadn't tried to hide the permit at all. He just happened to have an affinity for a color that made his permit virtually invisible.

For all his faults, this miner was at least creative with his excuses.

Neuromancer attempted--in vain--to use my name as a means of inducing our Agent to give him money. In the most passive-aggressive manner possible.

Meanwhile, the miner purchased a heavily tanked Skiff and returned to the asteroid belts to resume mining. He tempted our Agent to come gank him. But Alt 00 tried to coax him away from the edge of that cliff.

The miner refused to take the lifeline. Instead, he intensified his flirtation with disaster.

Alt 00 feared for the miner's future. She offered him another chance.

The Reverend Doctor Martin Luther King, Junior once observed, "The ultimate measure of a man is not where he stands in moments of comfort and convenience, but where he stands at times of challenge and controversy." There's nothing like a gank to reveal a miner's true colors.

In spite of everything, Alt 00 felt for the miner. Neuromancer had once possessed enough sense to buy a permit. The rebels and skeptics tell miners that owning a permit offers no protection from ganks. Some Anti-Gankers go so far as to say that our Agents target permit-owners first. However, it should be clear to anyone that Alt 00 made every effort to get Neuromancer back on track.

Alt 00 was unbelievably generous in her treatment of Neuromancer. It was almost too good to be true. And yet, Neuromancer didn't care. He felt absolutely safe in his tanked-up Skiff. Senselessly, he removed his permit from his bio. 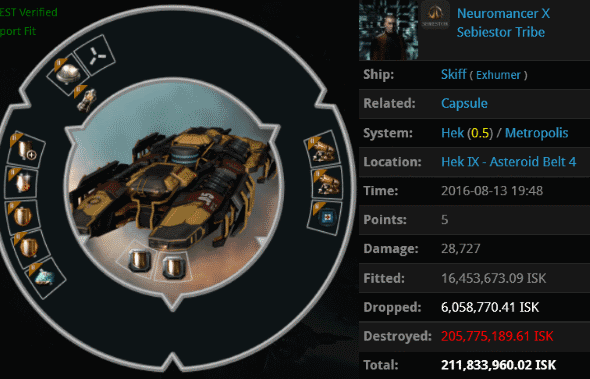 A few hours later, Alt 00 returned to Hek. This time she brought some friends. Her gank fleet pounced on Neuromancer's Skiff and incinerated it. Freed from the illusion that his Skiff was better than a permit, would Neuromancer seek forgiveness? Or would he fully embrace his inner Goofus?