The Search for Anti-Ganking, Part 6

Previously, on MinerBumping... The search for nobility among the Anti-Gankers continued. Agent Alt 00 was unsure of whether she would ever find it, so she multi-tasked by ganking a bunch of non-compliant miners in Nakugard. It proved to be an efficient use of her time.

Oddly, it seemed every miner in Nakugard happened to be in a bad mood simultaneously. But why should this be, when they have access to the Code? Highsec miner Sarah Jones cursed our Agent for not taking enough risks. She was probably composing a petition to CCP in another window--asking them to remove risk from highsec.

Another miner, Haze Tveskoeg, was deeply disturbed by Agent 00's philosophy. She reminded him of the notorious sociopath Sun Tzu. 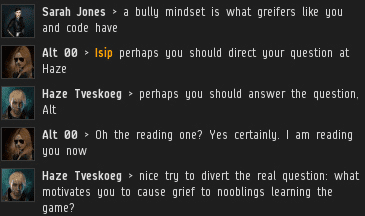 In fact, reading can be dangerous, if you regularly read the wrong things. For example, reading stuff in the market window while your Mackinaw is being ganked. Or reading about EVE on untrustworthy websites full of fake news--instead of MinerBumping.

Alt 00 assured Haze that she values each and every Cat that comes into her possession.

When checking her wallet, our Agent discovered that she'd received a payment of 50 million isk from someone named Lahnius. The name had a familiar ring to it.

It was true: Lahnius was the Anti-Ganker who had killed the Buzzard flown by Alt 00's scout alt! 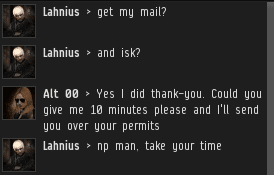 Alt 00 had suspected there was something out of the ordinary about Lahnius; he'd told miners in Hek to tank up their ships and buy permits. Now she had the exciting opportunity to sell an Anti-Ganker some mining permits. 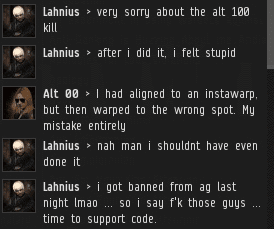 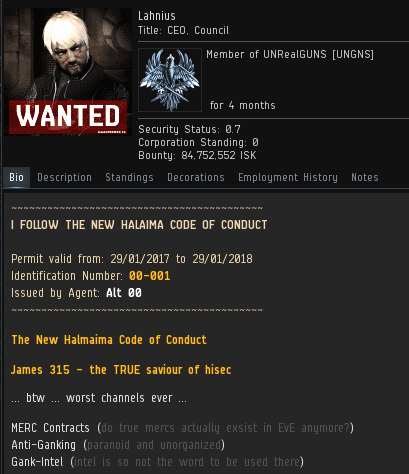 Alt 00 knew in her heart that even among the Anti-Gankers there must be a few with Gallant spirits. Now that Lahnius had turned to the light, how would the miners respond?

To be continued...
Posted by MinerBumping at 17:02