Previously, on MinerBumping... Agent Kalorned steamrolled Mission Ready Mining, a corporation that theoretically had 2,400+ members to drawn upon. MRM resorted to calling in help from several highsec PvP outfits, including the dreaded Vendetta Mercenary Group. War was imminent.

Unlike Mission Ready Mining, which wardecced Kalorned's gank alt corp, Vendetta Mercenary Group did its research. They correctly identified the corporation that Kalorned was a member of and declared war.

In less than 24 hours, the mercs would be able to freely attack Kalorned's bumping Orthrus. In the meantime, each side positioned its chess pieces and prepared to strike.

Vendetta Mercenary Group's preparations consisted of accusing Kalorned of breaking the EULA. The accusation spread like wildfire in Mission Ready Mining circles, which had long suspected our Agent of cheating somehow.

The carebears and their hired guns grilled Kalorned in local. If they could get a confession on the record and petition CCP, maybe Kalorned would be banned before the wardec went live. It was the safest approach.

Our hero toyed with the miners by switching to each of his gank alts and having them say something in local one after the other.

The MRM miners were now certain that Kalorned had gained an unfair advantage over them. It was the only explanation for their staggering defeats thus far--since they did not yet believe in the power of the Code.

Despite the persistence of MRM's interrogators, Kalorned managed to avoid giving them a smoking gun. He was one slippery Orthrus pilot, that Kalorned.

RM24 felt confident that he was closing in, but he never quite managed to close the deal. MRM and Vendetta Mercenary Group's pre-war strategy had failed. Worse yet, they were unaware that Kalorned was quietly maneuvering to checkmate them. 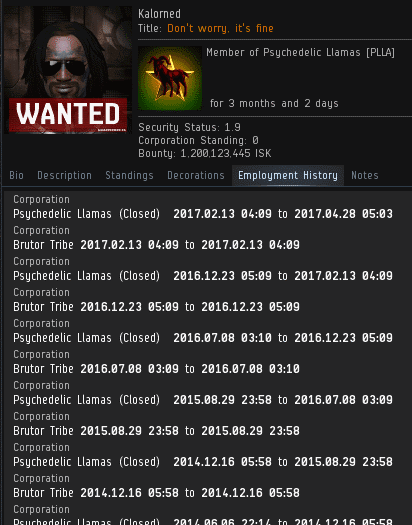 Kalorned won the war against Vendetta Mercenary Group by dissolving and immediately re-forming his corporation. This tactic was long considered an exploit by CCP. But several years ago, in a desperate attempt to garner favor among carebears, CCP changed the rule. Highsec carebears had begged CCP for total immunity from wardecs, and the corp reboot tactic did the trick--for smaller corps, at least. The Agents of the New Order love to turn the carebears' own weapons against them, and as Kalorned's employment history shows, he frequently did so.

Mission Ready Mining had hired Vendetta Mercenary Group to put a stop to Kalorned's bumping campaign. Unfortunately, they only succeeded in wasting a wardec fee. True to form, the highsec mercenaries immediately declared that their contract was fulfilled.

The next day, Kalorned and his gank alts returned to the Gelhan system. One of the MRM miners, Menomine Hekki, ominously declared that something would happen in three hours.

She was referring to the wardec against the gank alt corporation. MRM's alliance, Fly Fearless, had declared war the day before, and the war was set to go live in just three hours.

Since all of its members were at -10 security status, Kalorned hadn't bothered to reboot the gank alt corp. Yet the pilots of MRM acted like they were certain that the war would change everything. Did the carebears have something up their sleeves--something Kalorned didn't anticipate? Or would they simply fail again?