Previously, on MinerBumping... Highsec conspiracy theorist HoleySheet1 shocked the Gelhan system into silence when he announced that the mighty CODE. alliance was, in fact, operated by CCP devs. Mission Ready Mining corp was still reeling from the news when a fresh debate broke out in local. MRM member Captain BrewSir questioned the wisdom of buying a mining permit. New Order Agents rushed in to stamp out this dangerous heresy.


Sir Moustachio > A mining permit is like what, one full haul from a mining barge?
Kalorned > It's a very reasonable price
Captain BrewSir > no it's not
Georgia B Dixie > You'd be crazy not to buy at least a handful for every character.
Captain BrewSir > don't bullshit

Our Agents used logic and math to back up their arguments; the miner used profanity.


Captain BrewSir > no you have bunch od retards who like to gank justifying their activity with false sense of "doing good" for game as a hole
Sir Moustachio > I mean you talk badly of code, but look at the mineral market history from around the time CODE became an entity, they made a massive difference, code literally made mining profitable again
Sir Moustachio > without CODE, your mining would earn you about 1/10th of what it does now
TheInternet TweepsOnline TheInternet > You'd think they'd be thanking us.

Captain BrewSir could sense that he was losing the debate. It was time for a classic highsec miner deflection:


Captain BrewSir > still most of the mining is in null sec
Captain BrewSir > why don't you go there to inforce the rules
Captain BrewSir > long story short, you are mostly hurting new players, not people who have 10 accounts for mining
Sir Moustachio > The mining in Null is typically focused on the high end minerals not available in highsec, and has little impact on newer players. However clearing the highsec bots and raising the value of highsec ore helps all newbies

Aggrieved highsec miners often claim that it's much safer in nullsec. They then invite our Agents to go there. However, if nullsec is really that much better for miners, then why don't they go there? After all these years, the miners still don't have an answer for that one.

Finally, the MRM member appealed to the old "stop your ganking so we can save the newbies" line. By sheer coincidence, Captain BrewSir himself would also benefit if ganking stopped. He was only motivated by altruism, though.

Actually, while the debate was going on, Agent Kalorned wasn't ganking--he was bumping. The bump recipient, Victor Klauss, rewarded him with a bounty.

Victor gave up mining for the night and docked up. He noticed the debate in local and decided to place an additional 100 million isk bounty on Georgia B Dixie. Apparently this was his way of downvoting her.

Our Agents laughed off the size of the bounty, but Victor didn't respond in local. On the inside, though, he was seething. You might assume that I'm guessing at his emotional state for dramatic effect, but... 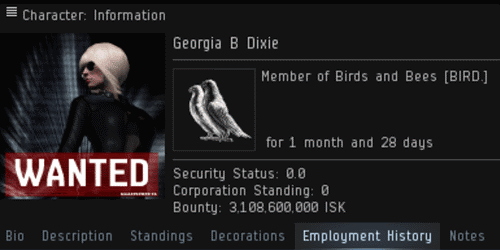 ...He did. Victor was baited into wasting another 3 billion isk. I guess that's how you win the bounty game.

Victor's only return on the investment was more mockery. Georgia might've hoped to bait the miner into placing an even bigger bounty, but Victor was tapped out.

Our heroes retired for the day, satisfied by the knowledge that they'd made Gelhan a better place. They were excited for the system's future. There was no telling what the next day would bring.

Indeed, our Agents never could've predicted the latest drama to unfold in Gelhan: A fight was breaking out between conspiracy theorist HoleySheet1 and the CEO of Mission Ready Mining, Gai Heiyuu.