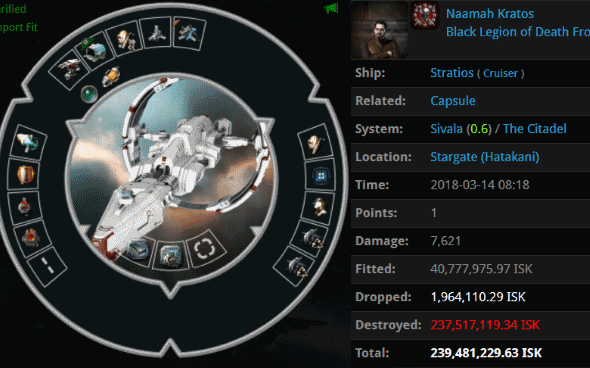 A ship like this one presents a single, obvious question: "Why?" 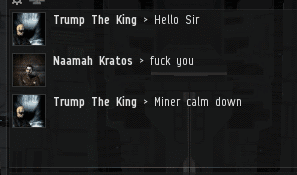 Agent Trump The King hoped to be illuminated by a private convo with the pilot of that curious ship. Naamah Kratos wasn't in the mood to speak. Many hours later, though, Naamah found himself tormented by a question of his own: "Why?"

Agent Trump was more willing to illuminate than the carebear had been. He responded to the simple question with an equally simple answer.

Here's the thing about illumination: It's most effective when your eyes are open. Naamah was, for the moment, blinded by his own misconceptions about EVE.

Through his EVEmails, Naamah revealed that he was a Goofus--to a scandalous degree. According to the Goofus, he'd been AFK "for a very good reason", but he couldn't imagine any reason why someone would want to blow up his spaceship.

A perfectly contemptible creature himself, Naamah took comfort only in the fact that he was not a highsec miner. There's something to be learned from that, miners.

It's unclear where Naamah got his ideas about how EVE is meant to be played. The important thing is that he didn't get them from the Code. No wonder he was faring so poorly.

Agent Trump raced to the poor fellow's rescue. Some might accuse our Agents of trolling, but the truth is that Trump was absolutely willing to hear him out. That sweet reimbursement isk was just one good reason away.

At this point, the record leaves us; the logs show nothing. What happened next must remain a mystery. What we do know, however, is that Naamah was not satisfied by the outcome.

A real-world cash bounty for kills against CODE. members? Agents, ready your smartbombs!
Posted by MinerBumping at 18:15