In the lead-up to the great Burn Jita event of 2018, the Anti-Ganking "community" was hard at work. Only with extremely thorough preparations would they be able to prevent the mass ganking of freighters.

...But remember, these are Anti-Gankers we're talking about.

Rexfelis Jumper quickly took command of the conversation. He was sure he'd read somewhere that the mighty CODE. alliance was dead. In fact, CODE. had just surpassed 2 trillion isk in monthly damages for the first time, and was in the process of breaking its all-time record again as Rexfelis spoke.

Over the years, however, the rebels have found it much easier to pretend the New Order is dead than to actually combat its growing power. The downside: It's more difficult to recruit Anti-Gankers if you pretend that no ganking is going on.

From the beginning, carebears have been enamored with conspiracy theories about CODE. being controlled by Goons, or vice-versa. This applies to any other alliance viewed as dominant in nullsec. Back when TEST was seen as a rival to GoonSwarm, the miners spun similar theories about them.

The reason for the conspiracy theories is simple: The Anti-Gankers struggle to understand the power of the Code. By contrast, they get why Goons wield influence in nullsec: Numbers, infrastructure, etc. So the carebears simply imagine that a nullsec power must be responsible for CODE.'s success.

Rexfelis was supremely confident that he understood Goons, CODE., and anything else that might come up for debate in the Anti-Ganking channel. Anyone who disagreed with him would soon face his wrath--fellow rebel or no.

Keldain attempted to push back against the conspiracy theories. Still, he was only an Anti-Ganker. He flunked the "praise James" test.

In truth, many nullsec entities support the Code--even if those entities fight each other. Smart people recognize that the Code is an absolute necessity for highsec, and good for EVE in general. But the source of our power is the Code, not nullsec wealth. That fact never fails to mystify the Anti-Gankers.

Rexfelis was eager to get Keldain to concede. The debate would continue, however.

In fact, nullsec line members know better than anyone that the New Order engages in elite PvP. We play the EVE endgame. Nullsec pilots merely press "F1" and hope their enemies make more mistakes than they do. Gankers have a much narrower margin for error when contending with CONCORD, and faction police force a time limit that necessitates precisely scouted warp-ins. And, of course, anyone from the teeming masses of highsec may attempt to intervene in the gank. Throw in the challenges of multiboxing and manually piloted bumping, and add a layer of dodgy, undocumented, and frequently changing aggression mechanics. Our Agents do all that and press "F1". Bravo!

In the end, any debate in Anti-Ganking must result in the rebels turning against each other.

Paranoia and a uniquely toxic atmosphere make the Anti-Ganking channel good for a few laughs, but it is still a tragic place. 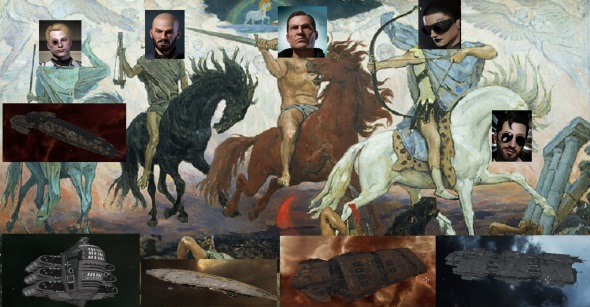 The rebels are right about one thing, though: When it comes to good, quality artwork, CODE. and the Goons are both united in favor of it. Agent Globby painted this fresco to commemorate recent triumphs against enemy freighters. Click here for the full-size version.
Posted by MinerBumping at 18:31