Uh-oh, you know what that means... It's time for another edition of the Highsec Miner Grab Bag!

That got dark in a hurry, even for the Grab Bag. On the bright side, Maken111 will probably clarify his remarks by saying he was referring to in-game activities only.

I was wondering when you'd show up.

Instead of pretending they're all helpless newbies, the carebears who want a risk-free highsec now refer to themselves as "new and returning players", as if that should be a protected class. The line between a regular player and a "returning player" is particularly fuzzy. Regardless, if EVE is a dying game, why do they want to grind money in it?

I suppose Delaron Eraborn was one of those returning players who should get gank immunity. He was (auto-)piloting a 9.8 billion isk freighter. At least he took the loss better than the guy hauling 34 million isk.

Agents of the New Order are advised to periodically review their contact notifications. They're a commonly untapped source of miner tears.

Svipull and his fellow Anti-Gankers have been reduced to writing manifestos in local chat. Don't worry, the New Order will never allow the rebels' nightmarish vision of highsec to become a reality.

From profanity to confession in three EVEmails. Our Agents are exceedingly efficient at getting to the truth. 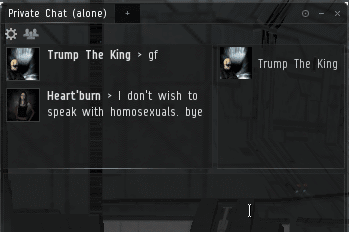 Not every carebear is as forthcoming, though. This one was piloting a freighter with a collection of plastic-wrapped packages. Very secretive.

Oh good, another returning player. Maybe CCP could send players a link to the Code whenever they reactivate an old account? 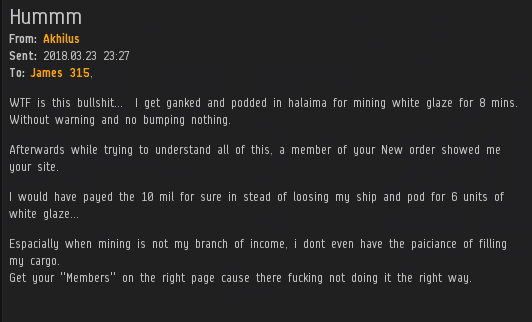 Between my Agents and these filthy miners, I'm pretty sure I know who's doing things the right way.
Posted by MinerBumping at 18:50