Previously, on MinerBumping... Mission Ready Mining was in a state of crisis. It had become clear that the New Order's Agents could not be removed from the system, no matter how many thousands of carebears belonged to MRM. Worse yet, each time the miners tried to argue with an Agent in local, the Code always won. 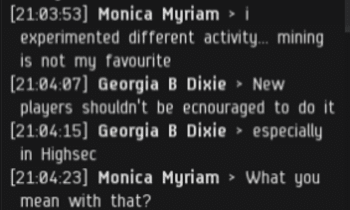 Though MRM corp was her enemy, Agent Georgia B Dixie demonstrated extraordinary compassion for the miners. She wanted them to enjoy EVE for once. 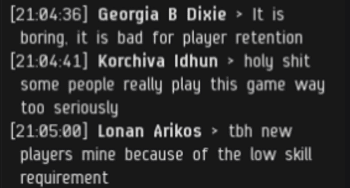 In fact, the miners--and their corp's "leaders"--were their own worst enemy. Agent Georgia offered them salvation. 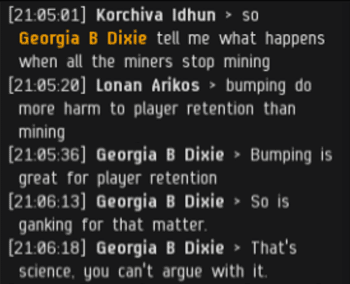 Since Georgia could stop anyone from mining, and since nobody could stop her from bumping, she became the de facto authority figure in Gelhan. The miners directed their questions to Georgia, rather than MRM "leadership". 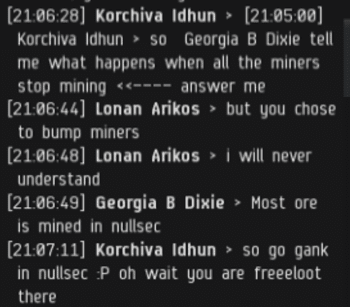 Georgia happily bumped industrialists across the Gelhan system. Our Agents are famous for their ability to multitask; Georgia deftly obliterated the arguments of MRM's brightest minds between bumps. Still, the miners tried to debate Georgia. Since they were unable to mine, they felt they had nothing better to do.

MRM member Lonan Arikos considered himself a rising star in MRM. He had ambitions to climb his way up the massive corp's hierarchy. But he was troubled by the truth he found in some of Georgia's claims. For example, mining did suck. 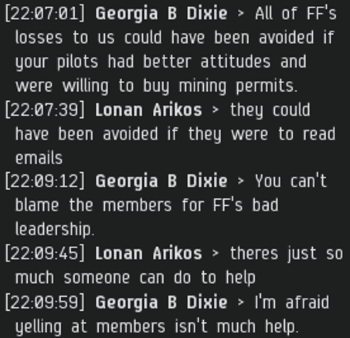 Referring to MRM's alliance (Fly Fearless, or "FF"), Lonan tried to defend the leadership and its handling of the conflict. Georgia stuck up for the little guy. The Agents of the New Order were the miners' only true friends!

With the entire Gelhan system's attention focused solely on Georgia and her bumping activities, it was only a matter of time before MRM tried to assemble another fleet to deal with her. 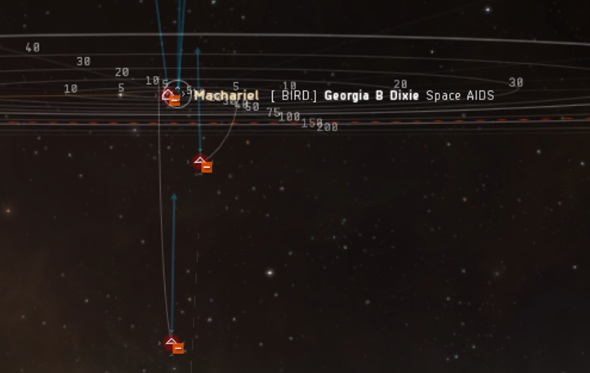 Alas, it seemed that the days of giant (but useless) defense fleets were over. MRM could only muster a paltry few ships. 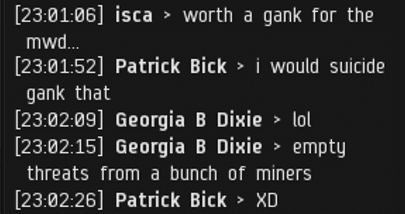 As usual, threats were made. But by this time, the rebels were only going through the motions. They all but admitted that their threats were merely for show. 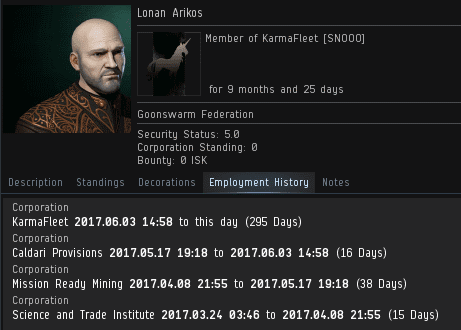 MRM was losing faith in itself. Lonan Arikos saw no future in the corp. Shortly after his conversation with Georgia, he quit MRM and made his way to nullsec to join the Goons. Yes, MRM lacked faith. Could they be persuaded to put their faith in something new--the Code?