Over One Trillion Five Hundred Eighty-Five Billion in Shares Sold 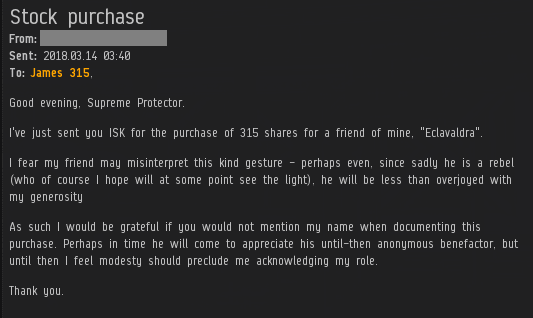 It's never too early for a fun game of Secret Saviour. 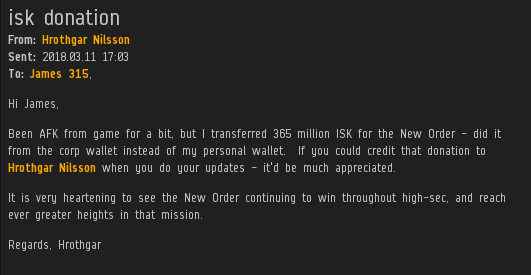 Hrothgar Nilsson purchased 365 additional shares, which took us past the 1,584 billion isk mark and earned him a Supreme Protector's Tip of the Hat™. But don't be fooled by the nice, innocent EVEmail he sent. In the world of business, the dude's a shark. His modest purchase allowed him to creep closer to Bing Bangboom, the sixth-largest shareholder of all time. This is the EVE market metagame at its finest.

Erika von Heisenberg also wisely increased her holdings of New Order stock this week. Her purchase of 520 shares took us past the 1,585 billion isk mark and earned a fine Supreme Protector's Tip of the Hat™ of her own.

You never know when your next gank might be your last.

When powerful friends in nullsec aren't enough: dawn11720 took his threats to the next level with the "phantom dev" approach.

...And when powerful friends in CCP aren't enough, there's always the classic "I'm going to murder your wife" routine.

After embarrassing himself in local, dawn11720 initiated a private convo. He wasn't done yet. The carebear apparently threatened to murder Agent C-ta's children while pretending to look up the Agent's Facebook profile or something in real-time. Of course, we don't actually know if C-ta has any children, but dawn11720 took a chance. Did it pay off?

The carebear opened up a second convo. This time, it seems he was pretending to hack into C-ta's credit card or bank account. If only our Agent had known this guy was so dangerous before ganking his anti-tanked hauler! But our Agents only laugh at danger.
Posted by MinerBumping at 18:05