Gank the One You're With

You know what that red star means, don't you? War! 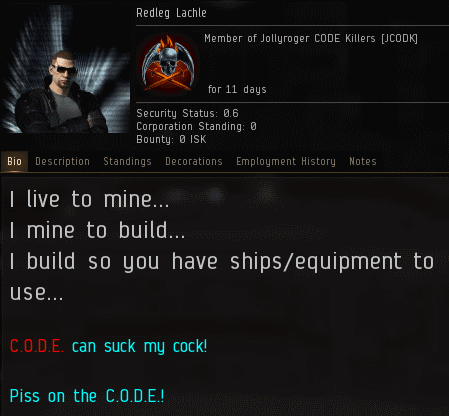 The corp only had three members, but one of them was Redleg Lachle, and he seemed serious enough. At any rate, Agent Super Perforator actually managed to come across Redleg's name in local, so there was a Jollyroger CODE Killers presence somewhere.

The Poinen system, once a bustling hub of activity, was quiet. A lonely miner named Podpilot pinged local. An hour later, there was only silence. 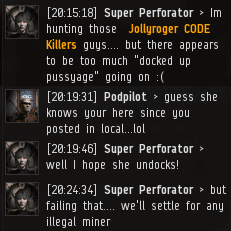 Agent Super Perforator took pity on the solitary miner and struck up a conversation with him. She, too, was looking for someone. Since her war target was staying docked up, our Agent would have to find another way to get her kicks and enforce her Code. 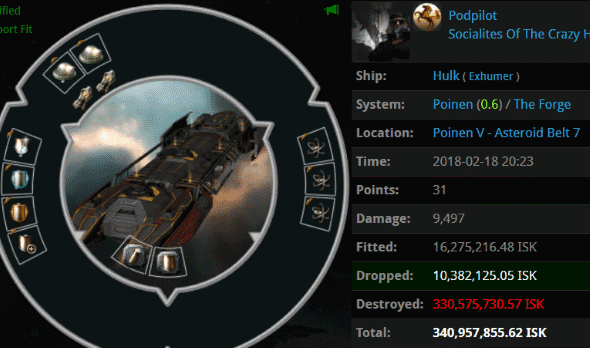 In an ironic twist of fate, Super Perforator ended up killing Podpilot himself. He was at the helm of a rare Power Diagnostic System-tanked Hulk. 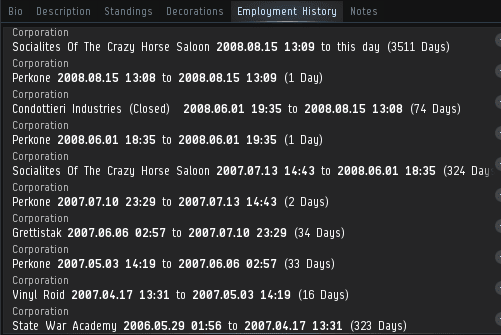 Why would you expect the miner to know any better? He's only been playing EVE for 12 years, and highsec mining has a steep learning curve. 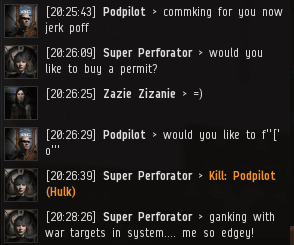 The lonely Podpilot had finally found someone to play EVE with. He discovered that he didn't enjoy it. He was a bot-aspirant. 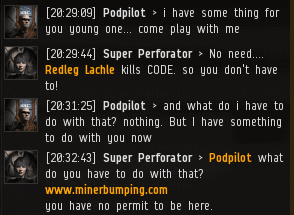 Even so, Super Perforator was the only player who cared enough about Podpilot to shoot him. If the miner learned how to PvP, maybe he could get some revenge and make his 12-year stint in EVE worth it. 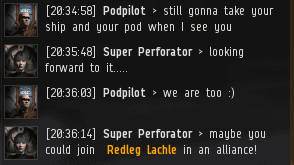 Our Agent has heard enough threats over the years to know when they're empty. Generally speaking, when they come from people who tank their Hulks with Power Diagnostic Systems, they're empty. But Super saw an opportunity to do a little matchmaking. Maybe Podpilot could become the fourth member of Redleg's anti-Code corp.

In the end, Super's initial instincts would prove correct. Podpilot never did manage to get his revenge, or to make any serious effort at seeking it. They say there's someone for everyone. But the truth is, without the Code, there's nothing for a miner to look forward to but pain, emptiness, and regret.

Mining permits are currently on sale for 10 million isk.
Posted by MinerBumping at 18:30