Previously, on MinerBumping... The Gelhan system used to be a stronghold of the Mission Ready Mining corp. Now it was in flames, beset by the New Order and The Marmite Collective. Without warning, an x-factor introduced itself into the already complicated Gelhan situation: HoleySheet1, a conspiracy theorist determined to tangle with Gai Heiyuu, MRM's CEO.

Our Agents entered Gelhan when the argument between Gai and HoleySheet1 was already in progress. Apparently Gai copy-pasted something he'd said earlier, for emphasis.

HoleySheet1 had no love for Marmite leader Tora Bushido, but he could see that MRM was being routed by Tora's forces. Gai tried to morale-post in local as best he could. 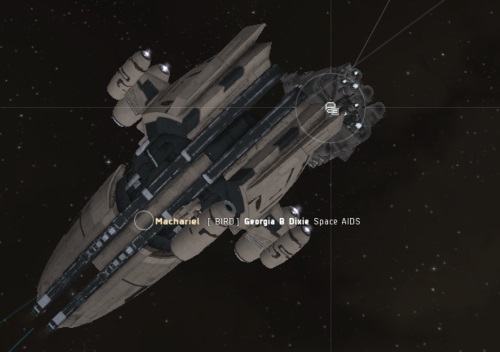 Agent Georgia B Dixie wasn't interested in all the politics. She sought refuge in the simple truths of the Code. And today the truth was that Georgia didn't feel like allowing a freighter to move through the system. So she continually bumped it. 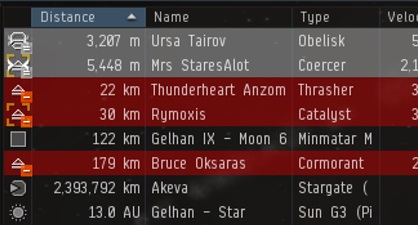 Though the freighter pilot was a neutral (unless she was an MRM alt), Georgia's bumping attracted a lot of attention from the usual suspects. A squad of destroyers began following her around. They targeted Georgia, but as usual, they didn't dare open fire. 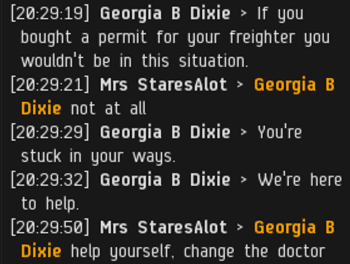 In Georgia's eyes, the freighter pilot's plight was a teachable moment. Luckily, our Agent is an excellent teacher.

Another day in Gelhan: Everything revolved around our Agent and what she chose to say and do. She dictated the action entirely. This is what it means to be a member of the New Order.

The members of MRM would much rather have spent their days mining AFK and such. Instead, they were forced to react to Georgia and the Code.

We've seen carebears claim to have powerful friends in nullsec. Others hint at secret connections in CCP. But the most ambitious miners of all are those who suggest that they know the Saviour of Highsec himself.

Without realizing it, the anti-Code rebels themselves effectively admit that I wield the most extraordinary influence over EVE. On this point, at least, they're not wrong. The history of EVE is neatly divided into the Code and pre-Code eras. 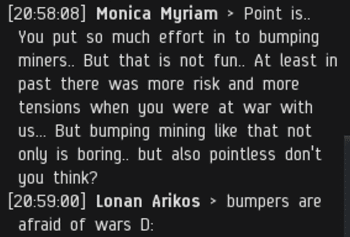 On any given day, countless carebears beg CCP to nerf ganking and wardecs. If you want a miner to say something nice about ganking or wardecs, bump them. 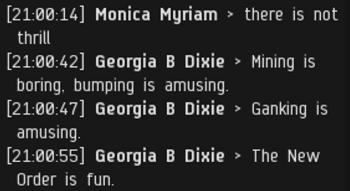 In a few lines, Agent Georgia elegantly stated one of the most powerful truths in EVE: Agents enjoy the game; carebears do not. Is it any wonder that we're winning and they're losing? 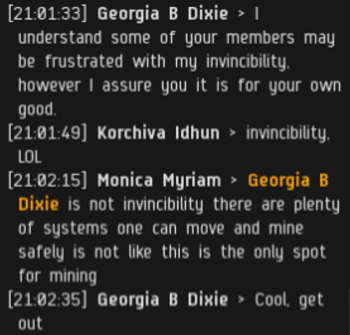 At last, the rebels backed themselves into a rhetorical corner from which there was no escape: The only way to deal with a bumper is to run far, far away. Was MRM ready to cede Gelhan to the New Order?