You Can Take the Miner Out of Highsec

Highsec miners try to take heat off of themselves by encouraging our Agents to go and kill the miners out in nullsec. On occasion, our Agents do just that. 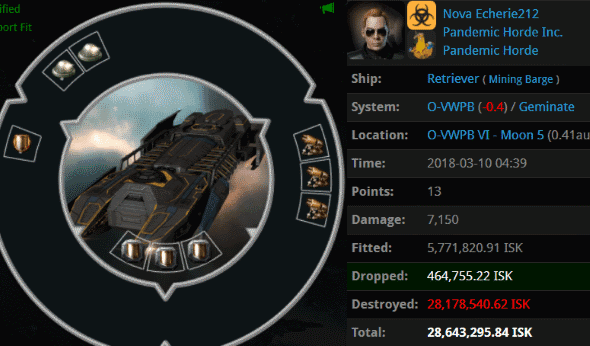 Agent hellyeaz enjoys shooting nullsec miners for target practice. It's casual and relaxing. Unlike the elite endgame PvP that is highsec ganking, there's no CONCORD or faction police to deal with. hellyeaz eliminated Nova Echerie212's Retriever, which was mining in a busy system controlled by Pandemic Horde.

Even though he lived in Geminate, Nova's highsec roots showed. 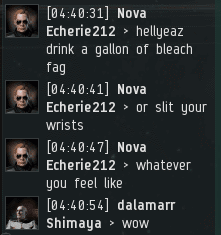 When Nova noticed that hellyeaz was still in local, he was no longer content with writing EVEmails. The miner didn't seem to care that local was also being monitored by a large number of his fellow alliance members. His rage flowed freely.

Oh, I get it. This is going to be a running joke. 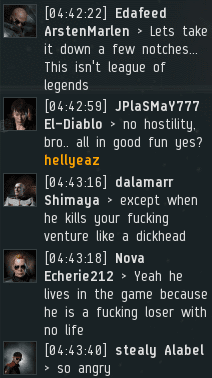 Pandemic Horde miners don't like being used for target practice. Still, Nova's attitude stood out as particularly toxic. If he lived in highsec, he'd fit right in among the rebels. 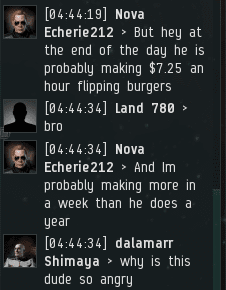 Now the miner was faced with a dilemma. A highsec carebear in his position would invoke powerful friends in nullsec. He might threaten to call in a fleet from Geminate. But this miner was already in Geminate, along with the Agent who'd ganked him. 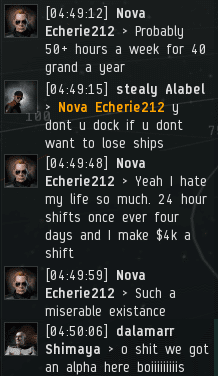 The solution was to invoke reinforcements, as it were, from outside EVE itself. "I make more money than you do" is the equivalent of a highsec miner claiming to have an important alt in nullsec. 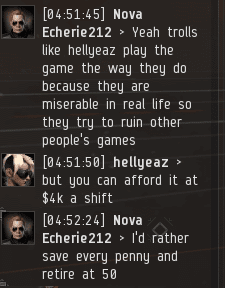 Nova was an isk-grinder, through and through. Granted, it might not be very productive to spend one's day mining in a fail-fit Retriever. But what little money Nova did make, he would hoard.

hellyeaz practiced his mining permit sales technique. Nova balked at the 10 million isk price tag, though he claimed to be wealthy.

When questioned, Nova confirmed that he had plenty of money for PLEX. Indeed, he could comfortably buy trillions of isk. But he preferred to make his money by spending hours cycling a pair of tech I Strip Miners.

Still sore about the loss of his precious Retriever, Nova nevertheless declared himself a winner. Our Agent knew better. Though anyone can waste away the days, mining and imagining they'll own a beachfront mansion "someday", reality cannot be moved: There is no victory without the Code.
Posted by MinerBumping at 18:44