The Return of Bob, Part 2

Previously, on MinerBumping... Agent Bob the Fourth returned to highsec. Quickly surveying the place, he determined that it was not yet perfect. So he went back to enforcing the Code and helping the miners obtain legal status. Bob met Merkilo Tay, who lost over 2 billion in blingy drones to Bob's smartbombs. Despite her losses, Merkilo was skeptical about the value of a New Order mining permit.

Merkilo had been ganked by the mighty CODE. alliance before, yet she still didn't obey the Code. That was a red flag.

Bob was tough, but fair. He didn't care how difficult it would be to sell Merkilo a permit. It was in the Code, and that was all there was to it.

Merkilo's latest excuse had only just escaped her lips before she opened her wallet. She didn't even wait for Bob to destroy her argument. 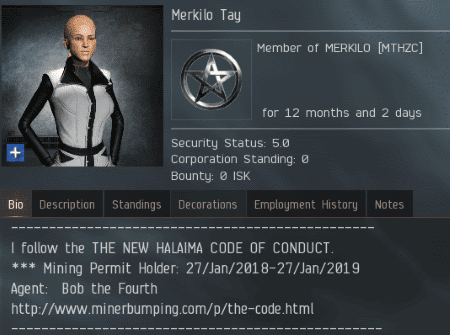 Now the miner had a license to mine. It was the first decision she'd made in EVE that she could be proud of. Nevertheless, it was no guarantee of Merkilo's future good conduct. Would she be a good permit-holder or a bad one?

"I bought a permit from you, but shouldn't I also petition you?"

Bob didn't tell Merkilo that she wasn't allowed to file a petition. He did, however, suggest a different way of looking at things.

Ultimately, Merkilo chose to send me a reimbursement request. I suppose she decided it was better to send a petition to the Saviour of Highsec than CCP. For some reason, Merkilo's request was in Russian. My response, as I reported in Highsec Miner Grab Bag #150, was: "My Russian is a little rusty, but I'm pretty sure Bob the Fourth is the good guy in the story being told here."

Looks like my Russian is still good enough to get by.

Agent Bob loves the Solitude region, and he very much wants for it to succeed. But that's impossible as long as miners disobey the Code. Therefore, Bob's love compels him to kill the miners.

Or, in some cases, to kill their drones. Though not as pricey as Harvesters, a flight of 'Augmented' Mining Drones is worth over a quarter billion isk. 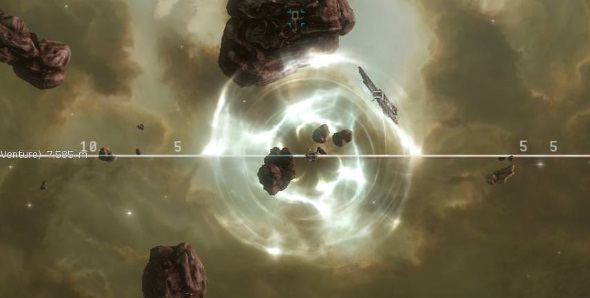 Drones are easily destroyed by smartbombs, so even while acting on his own, Bob was more than capable of clearing asteroid belts and ice anomalies of them.

If a highsec miner isn't a total bot-aspirant, he can easily pull his drones whenever an Agent enters local. Our Agent confirmed that he was indeed dealing with bot-aspirants. 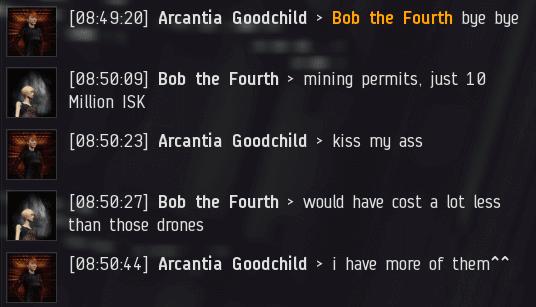 And bot-aspirants, it seems, enjoy losing. A lot.