The Worst Miner on the Block

Back in the days of watchlists, I frequently received convo requests whenever I logged in. Obviously they're a much rarer sight now. 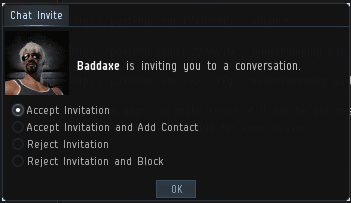 ...So I was surprised to see a chat invite from someone named Baddaxe; the pop-up appeared mere seconds after I logged in.

(A common reaction from players who receive a personal audience with one of the most famous EVE players of all time.) 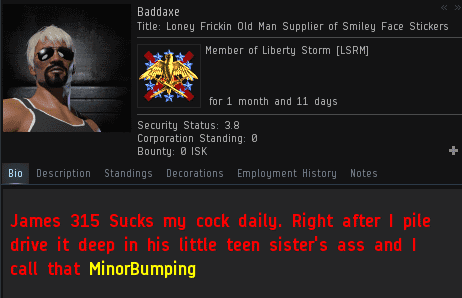 Baddaxe took the opportunity to tell me a tale of woe. A little over two years ago, he'd been the subject of a two-part MinerBumping post, Bad Acts, Part 1 and Bad Acts, Part 2. Here's a sample:

As you may recall, Baddaxe made an unfavorable impression.

It's okay, Guard, we've got things under control here. 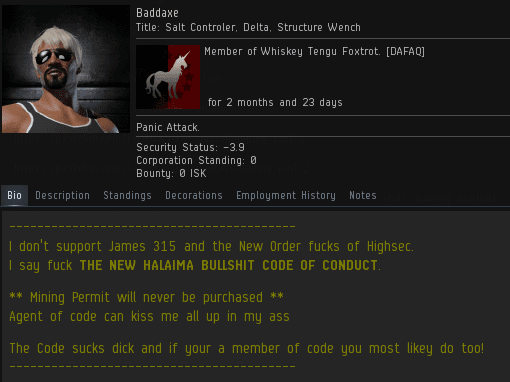 According to Baddaxe, he eventually left highsec to reinvent himself as a lowsec PvP'er--though his bio suggests that he didn't leave his hatred of the Code behind. He'd all but forgotten about the MinerBumping posts. But then, for whatever reason, Baddaxe received an EVEmail from a kind soul who asked him about it. Baddaxe didn't appreciate the reminder: 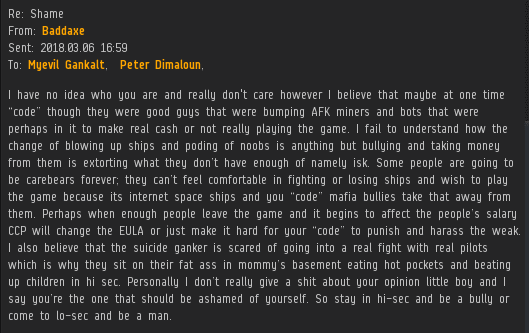 Baddaxe's reply confirms the sentiment expressed by his bio: You can take the carebear out of highsec, but you can't take the highsec out of the carebear. (Baddaxe's concerns about the EULA are somewhat amusing, given his self-professed penchant for murdering, raping, and eating EVE players' family members.)

The miner urged me to believe that he was a changed man. It's true that some people are capable of change--usually with my assistance. As for people claiming to have changed, I have a "show, don't tell" policy on that sort of thing.


James 315 > Baddaxe why not? Are you an unpleasant person IRL?
Baddaxe > not realy but I am the baddest kid on the block
James 315 > Meaning?
Baddaxe > this is a game and sometimes your people take it too far. I'm just saying there are dangers in the real world that shouldn't be in the game

I was not yet convinced that lowsec had been good for this carebear.


Baddaxe > youve seen swating right?
Baddaxe > wackos that take it too far getting real people hurt in real life
James 315 > Are you accusing "my people" of swatting?
Baddaxe > no I'm saying sometimes they take it too far and it might lead to that someday

Though Baddaxe himself forswore any RL criminal activity, he hinted that someone else might retaliate against Agents in such a manner.


Baddaxe > this isn't a threat it's just a question. don't you think when your proplr mak some feel bad enough they can trigger somethin like that?
Baddaxe > your Peter Dimaloun just tried to open an old wound after over 2 years, just didn't seem to be a good pratice whey I have done nothing to deserve his or your atteneton
Baddaxe > it was going about my daily eve life staying out of your way and not messing with you, why would you want to mess with me?

If a highsec carebear did make EULA-violating threats, Baddaxe's experience suggested that they were unlikely to be smitten by the banhammer--or axe, as the case may be.

After considering Baddaxe's plea, I determined that my hearing him out was all the help I could give him. Also, I was busy doing other stuff, and it was time to clear the clutter of unnecessary chat windows.

When all was said and done, Baddaxe was still bad. Whether you live in lowsec, nullsec, or anywhere else, positive change requires the Code.
Posted by MinerBumping at 18:15