Previously, on MinerBumping... Agent Alt 00 and her fellow Code enforcers brought peace to the Uedama system by putting down a rebellion during the "Triglavian Invasion" PvE event. Just as things seemed to be getting back to normal, Alt 00 was contacted out of the blue by a mysterious stranger. 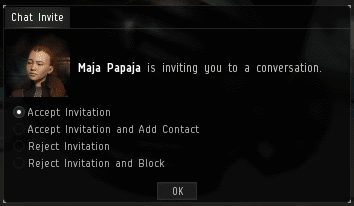 Anyone who enforces the Code for any length of time becomes accustomed to receiving convo invites. Such invitations are full of possibilities. 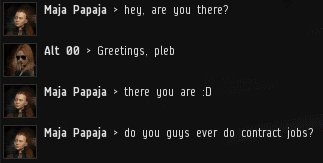 Maja Papaja wasted no time: She had a business proposal for our Agent.

Maja was a stranger, but Alt 00 had an intuition that she was a miner. Our Agent sought to test her. 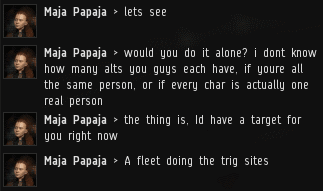 For some reason, Maja had a vendetta against some PvE'ers who were participating in the Triglavian Invasion event. And she could think of no one better suited to killing them than the mighty CODE. alliance. 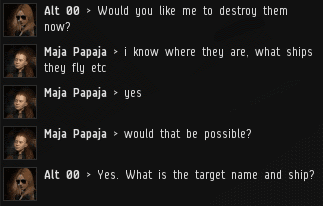 Alt 00 did not reject Maja's proposal. But she did insist on being paid a billion isk up front, no questions asked. Naturally, Maja rejected that requirement out of hand. But she was interested enough in arranging the hit that she shifted her focus to negotiating other terms.

There was no doubt that Agent Alt 00 was capable of raining death and destruction on any carebear in highsec; Maja expressed no skepticism about Alt's capabilities. However, Maja was worried about the cost. And, perhaps, she wondered if Alt would break the contract once the isk was paid.

Both parties negotiated intently. Maja offered 500 million isk. She should have known, though, that when it comes to negotiations or anything else, the Code always wins. 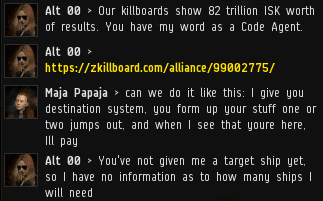 Maja came to realize that Alt 00's pricing formula was hard to argue with. To ensure that our Agent would not scam her, Maja suggested that she would pay once she saw the gank ships in space. 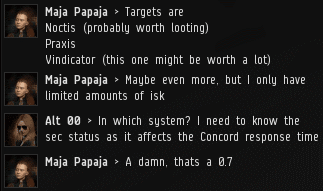 Maja couldn't help but be impressed by Alt 00's professionalism and determination. Agents of the New Order aren't fazed by anything. 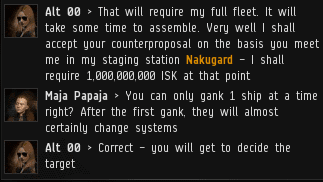 Alt 00 was perfectly happy showing off her gank fleet--that much she would've done for free. It would be displayed in Alt 00's Nakugard headquarters, though. 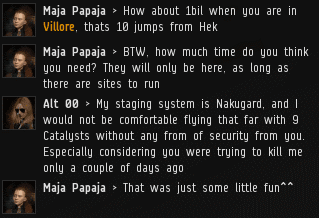 As the negotiations continued, Alt 00 sprung a surprise on Maja: Our Agent recognized her as someone who had tried (and failed) to interfere with ganks in Uedama! 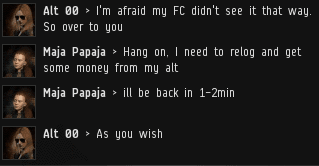 There was little left to discuss. Either the Anti-Ganker was willing to hand over a billion isk to a CODE. member, or not.