Previously, on MinerBumping... Maja Papaja's failure to purchase a mining permit threatened to torpedo her deal with Agent Alt 00--who had unfortunately already accepted Maja's billion isk for a gank contract. Alt 00 and Agent Revis Owen put in serious work to salvage the deal, but Maja was reluctant to buy a permit for some reason. 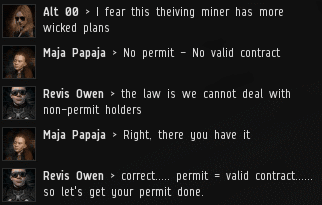 Maja's conduct thus far had been inexplicable. She seemed fully prepared to forfeit her billion isk in order to avoid paying anything for a mining permit. 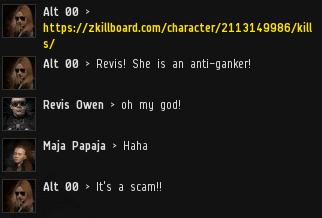 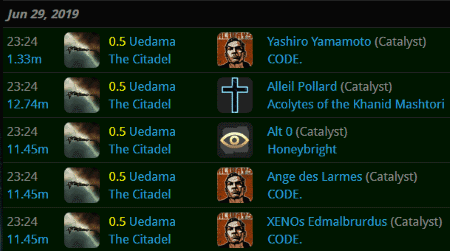 Just recently, Maja had engaged in attacks against New Order Catalysts in Uedama. What was she thinking?

Maja gritted her teeth and prepared to accept the loss of her isk.

According to Maja, she had big enough ticks to make more than a billion isk per hour anyway. I wonder what her preferred form of PvE is--buying PLEX?

At this point, it seemed as though the merc contract was dead and Maja's isk was gone...

...But Revis Owen wasn't quite done with Maja yet. As an impartial mediator, he had never failed to secure a deal. He wanted another shot at this. 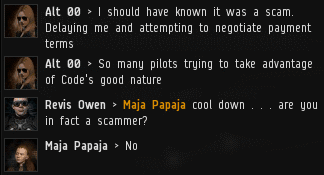 First thing's first: Agent Revis needed to determine if the entire billion isk payment to Alt 00 had been a scam on Maja's part. He quickly confirmed that it hadn't been a ruse. 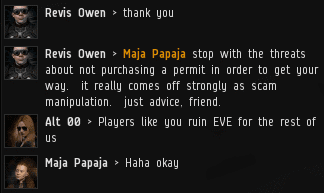 Next, Revis urgently needed Maja to soften her stance on buying a permit. Non-compliance was a deal-breaker, obviously. 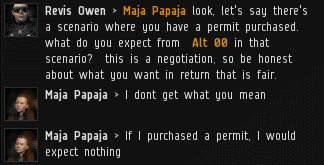 So far, Maja had declared herself to be firmly in the anti-permit camp. So Revis would need to proceed indirectly--confusingly, even.

Sensing that the Agents were trying to trick her into buying a permit somehow, Maja dug in her heels. It would take a miracle to get her to comply.