Previously, on MinerBumping... Maja Papaja paid Agent Alt 00 a billion isk to execute a gank on a specific target. Alt 00 accepted the isk, assembled a gank fleet, and prepared to carry out the contract. However, it came to light that Maja did not own a mining permit. Our Agent raced to salvage her agreement with Maja. 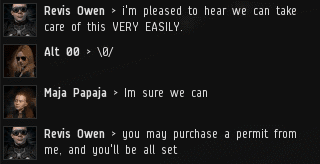 Agent Revis Owen to the rescue: A very attractive deal was worked out. Agent Alt would honour the contract with Maja, provided that Maja purchased a permit for 10 million isk. It was an incredibly generous arrangement, as the permit purchase would be applied retroactively. 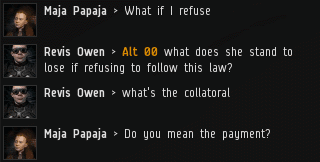 Somewhat bizarrely, Maja seemed to be entertaining the notion of turning down the deal. She risked losing her 1 billion isk for the sake of a mere 10 million. What was going on?

Agent Revis was incredulous. The permit would cost 1% of what Maja had already handed over. 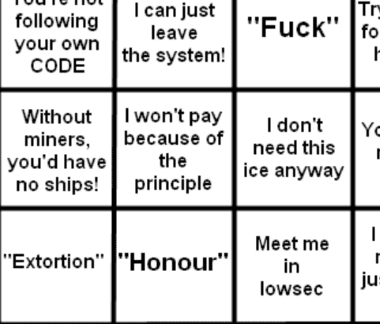 Even so, plenty of carebears have lost plenty of isk in the name of "principle". Revis hoped that Maja wouldn't end up like one of them. 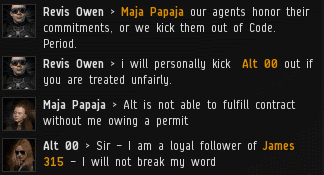 Perhaps Maja was afraid of throwing good money after bad. Then again, the "pot odds" were 100 to 1. If there was even a 1% chance that buying a permit would save her contract with Alt, it would be well worth it to pay. 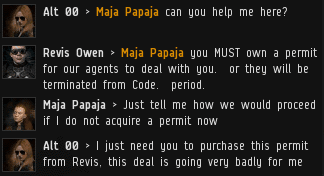 Revis and Alt 00 found the miner's attitude baffling. An Agent's word is as good as it gets. Their offer of a permit for 10 million was basically free money. 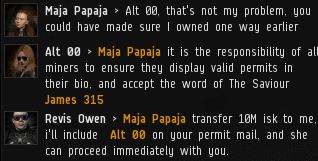 Maja had 7 years to buy a permit, and she'd frittered them all away. But now she had a second chance. 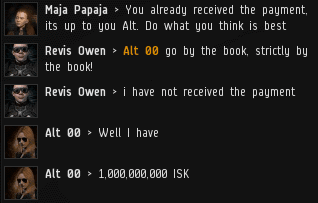 Stunningly, Maja was unwilling to buy a permit. Could the deal be saved by a loophole? After all, Alt 00 had already been paid 1 billion--far in excess of the 10 million required.

No, a billion isk merc contract does not equal permit ownership; the 10 million isk permit fee stands on its own. It's the same idea when someone wants to buy shares in the New Order in lieu of a permit: 100 million isk will get you 100 shares, or 90 shares and one permit. 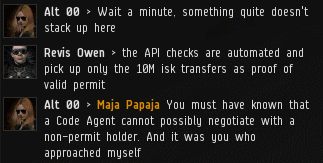 Agent Alt 00 grew suspicious. Maja's behavior was irrational--unless there was more going on than met the eye.

In defiance, Maja made a statement that shocked both of the veteran Agents. She'd rather throw her billion away than pay 0.01 isk for a permit! 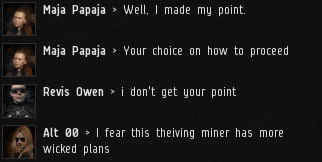 But the most shocking revelations were those yet to come.