Over One Trillion Eight Hundred Sixty-Three Billion in Shares Sold

Today, another tale of two Supreme Protector's Tips of the Hat™.

Our first Supreme Protector's Tip of the Hat™ goes to Priscilla Pareka, who added to her holdings of New Order stock by purchasing 1,000 shares. This guaranteed that we would pass another billion isk mark; in this case, the 1,862 billion isk mark. Priscilla therefore also guaranteed herself a Supreme Protector's Tip of the Hat™, which she now receives.

Then there's Scarlet Macaw Salvage and Transport, our newest corporate shareholder. The corp made a humble purchase of just 30 shares. However, this purchase very narrowly nudged us past the 1,863 billion isk mark. Thus, Scarlet Macaw earns a Supreme Protector's Tip of the Hat™, too--one no less valid than Priscilla's.

There's a lot to ponder there, eh? 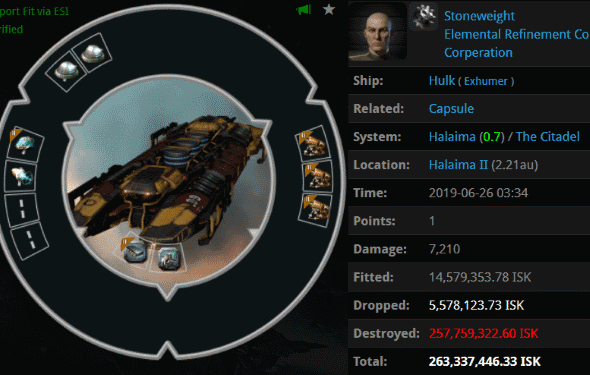 Stoneweight was ganked for non-compliance in Halaima itself, losing a Hulk and a 43 million isk pod in the process. Although Stoneweight has been in EVE since 2008, some critics might accuse our Agents of bullying an impoverished newbie and making his EVE experience worse.

Not so fast. Two days later, Stoneweight returned to his keyboard and sent an EVEmail to Aiko Danuja, who wasn't a participant on the gank: 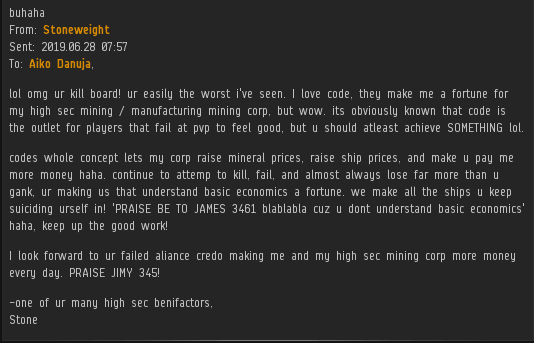 Stoneweight was one happy miner. He sang CODE.'s praises. How can the rebels and skeptics complain about our effect on the game when even ganked miners think we help them?

Upon receiving the EVEmail, Agent Aiko reflected deeply upon her killboard, allegedly the worst that Stoneweight has ever seen. She considered that perhaps Stoneweight had forgotten about his own killboard, so she reminded him of his recent Hulk loss--and got a surprise in return:

As it turns out, the Hulk loss cost Stoneweight and his corp absolutely nothing. Indeed, the miners made tens of billions of isk in profits as a direct result of CODE.'s activities. There you have it, right from the horse's mouth: CODE. is making miners rich, even by ganking them. Who can complain about that?
Posted by MinerBumping at 18:05