Previously, on MinerBumping... Permit-owning miners Unflinching Savior and The Ore Hunter CONCORDed themselves during a mysterious encounter with Cynthia Rotsuda, who had allegedly been bumping them with a frigate. The matter was referred to Agent Aiko Danuja, who urged the miners to file a petition--with the Saviour of Highsec.

Unflinching had penned a lengthy account of the incident and sent it via EVEmail, just as Aiko recommended. Doing so calmed the miner. He was happy to have his side of the story in writing--and he was confident that it would not be challenged.

Aiko had to admit that the unusual nature of the incident had fascinated her. Whatever came of it, she would see to it personally that justice was done.

The next day, Unflinching was mildly disappointed to see that his petition had not been answered; his blingy Skiff and Orca had not been reimbursed. But it was still early. 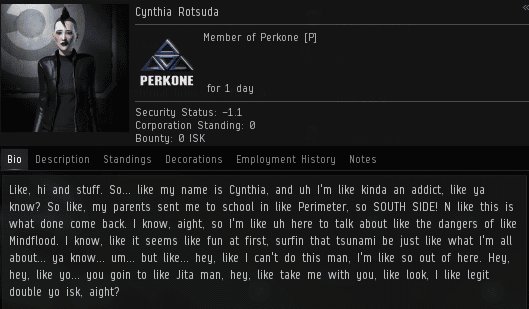 One thing troubled the miner: Cynthia Rotsuda, the vagabond who had started the whole mess, was still out there somewhere. He hoped that he wouldn't see her again, but feared that he would.

Weeks went by. The Saviour of Highsec had not yet spoken. Nor had Cynthia made her presence known in Halaima.

...Until she did. While the miners gathered ice in Halaima, they spotted Cynthia lurking nearby in a Venture. They hailed her in local chat, but she answered them not. 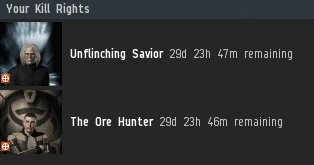 Unflinching had apparently forgotten something. On that fateful day in Halaima weeks earlier, he and his alt lost their ships to CONCORD due to their attack against Cynthia's frigate. That meant Cynthia had kill rights and 30 days to use them. And the 30 days had not yet elapsed.

Ergo, Unflinching was using an Orca in highsec with an active kill right, while looking at the person who possessed the kill right. 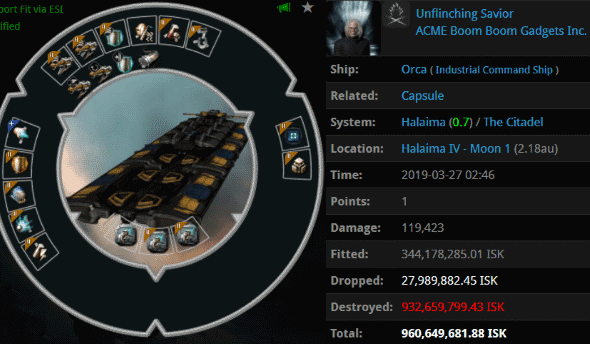 Both Orcas were utterly destroyed. Cynthia was the miner's own personal harbinger of death. 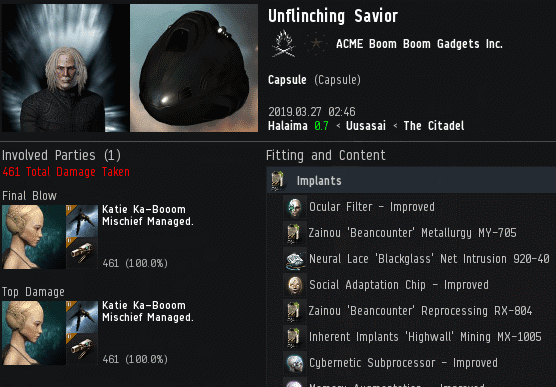 In shock, Unflinching only had time to save one of the pods. The other, worth 1.1 billion isk, was popped by a member of the gank fleet. Damningly, Unflinching's pod included a 'Highwall' Mining MX-1005 implant. 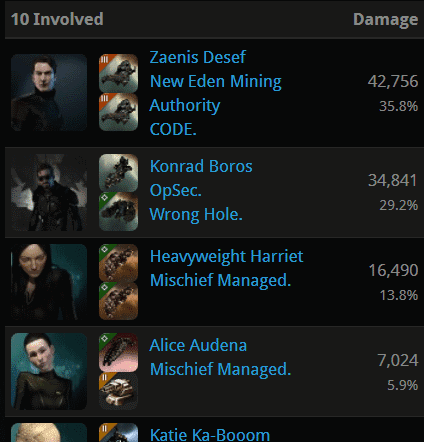 The situation only grew more curious. This was no ordinary gank fleet; it contained vessels with names like Proteus, Bhaalgorn, and Machariel. Heavy hitters. Had this all been planned in advance? Were they in league with Cynthia? 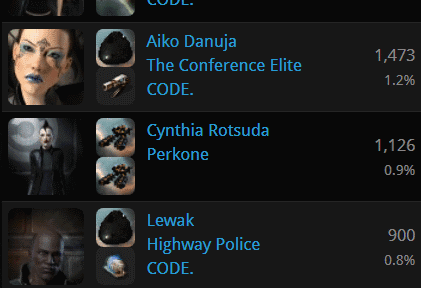 To be fair, some lighter ships were also involved, including Cynthia's Venture.

The miner had now lost a blingy Skiff and three Orcas in Halaima. That's an expensive butcher's bill for someone who mines in highsec. With things spiraling out of control, the issue of reimbursement was more urgent than ever. Luckily, Aiko Danuja responded quickly to the scene. The matter demanded an immediate investigation.